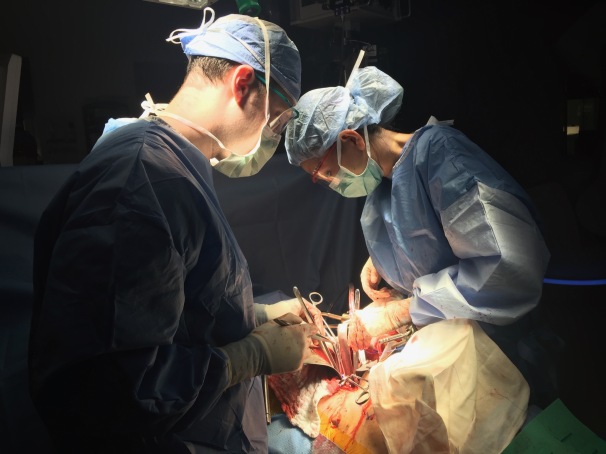 Drs. Roy Miler and Xiao Yi Teng performing anastomosis on open coversion of an aortic stent graft, now graduated and in practice. A significant part of their open aortic experience is in addressing failing stent grafts.

I recently had to remove a stent graft for infection and got to thinking about how the number of people who could comfortably and confidently manage that has thinned out in the world through the unintended consequence of the medical device market place. In every surgical specialty over the past twenty years, many open procedures were replaced with a minimally invasive option which generally involved adoption of new technology and large costs to the hospital. These newer procedures were touted as easier on the patient while being easier to perform for the average physician than the open procedure that they were replacing. That was the other selling point -that one could do several of these operations in the time it took one open procedure. In most cases, they were at best almost as good as the open procedure but at higher cost.

In the marketplace, minimally invasive always wins. In many specialties it became untenable to practice without marketing these “advanced minimally invasive” skills. Hence, the wide adoption of robotics in urology outside major academic centers -during those years of rapid adoption the surgeons would get flown to a course, work on an animal model, then for their first case a proctor would be flown out and voila -a minimally invasive specialist is born. The problem comes when learning these skills displaces the learning of traditional open surgical skills. In general surgery, it is not uncommon to hear of residents graduating without having ever having done an open cholecystectomy.  It is also the case that many vascular trainees graduate with but a few if any open aortic cases. What happens when minimally invasive options run out? Who will do my carotid endarterectomy or open AAA repair?

The first case is an elderly man with an enlarging AAA sac despite having had EVAR about seven years prior. No endoleak was demonstrated but the proximal seal was short on CT. Also, it was a first generation graft which is prone to “peek a boo” endoleaks from graft junctions and stent anchoring sutures. On that last point, I use the analogy of a patio umbrella -after seven seasons, they can leak where cloth is sewn to the metal struts. It is very hard to demonstrate leak of this kind on CTA or duplex ultrasound because they are small. The patient had his EVAR because he was considered high risk for open repair at the time of his operation -moderate COPD, mild cardiac dysfunction. His sac had enlarged to over 6cm in a short time, and therefore open conversion was undertaken. No clinical signs of infection were present. A retroperitoneal approach was undertaken. After clamps were positioned, the sac was opened. 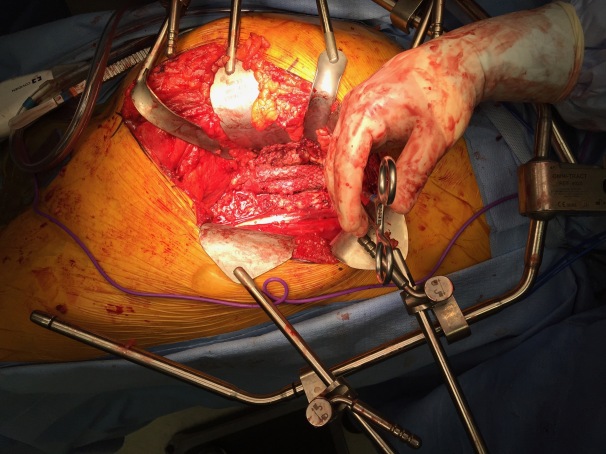 The picture does not show it, but a leak from the posterior proximal seal zone was seen with clamp off. The clamp was reapplied and the graft transected flush to the aortic neck. A bifurcated graft was sewn to this neck incorporating the main body stent graft and aortic neck in a generous running suture. The left iliac limb came out well and the new graft limb sewn to the iliac orifice, the right iliac limb was harder to clamp and therefore I clamped the stent graft and sewed the open graft to the stent graft.

The patient recovered well and went home within the week. He was relieved at no longer needing annual CT scans.

The second patient was an older man referred for enlarging AAA sac without visible endoleak. The aneurysm had grown over 7cm and was causing discomfort with bending forward. He too had been deemed high risk for open repair prior to his EVAR. If he had had an early generation Excluder graft, the possibility of ultrafiltration would be more likely and relining the graft would be reasonable (link). This was again a cloth and metal stent graft which can develop intermittent bleeding from graft to stent sutures, and I don’t think relining will help. 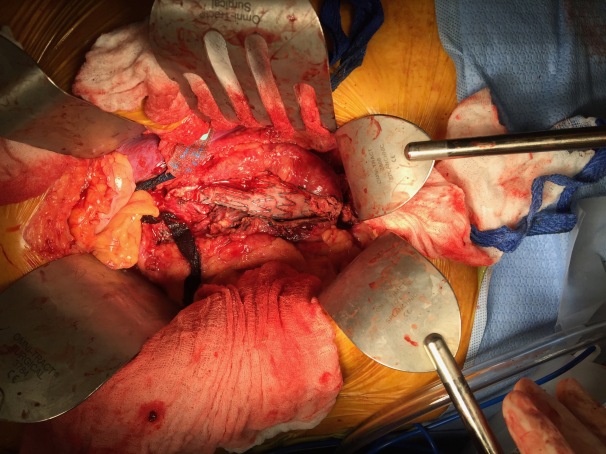 The patient was taken for open repair (above), and on opening the AAA sac, bleeding could be seen coming from the flow divider. It stopped with pressure, but I replaced the graft in a limited fashion from the neck to the iliac limbs as in the first case. This patient did very well and was discharged home under a week.

The third patient was another fellow referred from outside who had an EVAR for a very short and angulated neck, and a secondary procedure with an aortic extension in an attempt to seal the leak had been done. This failed to seal the type Ia leak. This patient too was deemed too high risk for open surgery of what was basically a juxtarenal AAA with very tortuous anatomy.

The patient was taken for open repair, and the stent grafts slid out easily (below).

A tube graft was sewn to the short aortic neck and distally anastomosed to the main body of the stent graft -with pledgets because of the thin PTFE graft material in this particular graft. This patient did well and went home within a week.

All three cases are patients who were deemed originally too high risk for open repair, who underwent EVAR, then underwent explantation of their failing stent graft. Only one involved a patient whose graft was placed off the IFU (short angled neck), but the rationale was that he was too high risk.

What is high risk? In non-ruptured, non-infected explantation of failing stent graft, the mortality is 3% (ref 2) from an earlier series from Cleveland Clinic.  With stent graft infection, the 30-day mortality of surgical management from a multi-institutional series was 11% (ref 3) when there was no rupture. From a Mayo Clinic series, stent graft resection for infection came with a 4% 30-day mortality (ref 4). These were nominally all high risk patients at the time of the original EVAR.

Real world risk is a range at the intersection of patient risk and the expertise of the operating room, critical care, and hospital floor teams. The constant factor is the surgeon.

Endografts for AAA disease (EVAR, endovascular aortic aneurysm repair), makes simple work of a traditionally complex operation, the open aortic aneurysm repair. The issue has been the cost and risks of long term followup as well as endograft failure and aneurysm rupture. The Instructions For Use on these devices recommend a preop, a followup 1 month, 6 month, and 12 month CTA (with contrast) and annual followup with CTA for life. These devices were meant to treat high risk patients but high risk patients with limited life spans do not benefit from EVAR (ref 1, EVAR-2 Trial). These have lead the NHS in the UK to propose that EVAR has no role in the elective repair of abdominal aortic aneurysms in their draft proposal for the NICE guidelines for management of AAA (link). While this is a critical discussion, it is a discussion that is coming at least ten years too late. A generation of surgeons have been brought up with endovascular repair, and to suddenly announce that they must become DeBakey’s, Wiley’s, Imperato’s, and Rutherford’s is wishful thinking at best or wilful rationing of services at worst.

Academic medical centers, behemoths though they are, serve a critical function in that they are critical repositories of human capital. The elders of vascular surgery, that first and second generation of surgeons who trained and received  board certification, are still there and serving a vital role in preserving open aortic surgery. My generation -the ones who trained in both open and endovascular, are still here, but market forces have pushed many of my colleagues into becoming pure endovascularists. The younger generation recognizes this and last year, I sat in on an open surgical technique course at the ESVS meeting in Lyons organized by Dr. Fernando Gallardo and colleagues. It was fully attended and wonderfully proctored by master surgeons. This is of critical importance and not a trivial matter. As in the 2000’s when endovascular training was offered as a postgraduate fellowship in centers of excellence, there is no doubt in my mind that today, exovascular fellowships need to be considered and planned and that current training must reinvigorate and reincorporate their open surgical components.

One comment on “A lot of people can put in a stent graft, unfortunately only a few can take them out.”