The development of metachronous common iliac artery aneurysm, or progression of them, after prior treatment with EVAR (endovascular aneurysm repair), particularly with “bell bottoming” is typically treated with coil embolization of the internal iliac artery and extension of the stent graft into the external iliac artery. While CH-EVAR has been in the news with the recent results from the PERICLES registry, I have never been entirely convinced of its durability. That is different in the case of building parallel grafts in an iliac limb of an EVAR graft (reference).

Here, the geometries, thrombosis, and forces combine to make gutter flow and endoleak unlikely. Choosing the right size of stent grafts to channel to the external and internal iliacs seems to be a challenge, but is easily solved by this scheme -which I can’t claim as my own, but was thought up by a surgeon in upstate New York who choses to remain anonymous.*

The diameter of the stent graft to be sealed to is measured and an area calculated. The sum of the areas of the two grafts to be placed need to equal or slightly exceed the area of this inflow stent graft. If you have decided the size of the external iliac graft, for example, then the diameter of other graft is merely a few geometric formulas away.

Here is a table that can be helpful in avoiding those formulas.

The inflow graft area is taken from its measured diameter. Then usually one or the other artery has an obligate size -a size the graft has to be while the other has more “wiggle room.” The other thing that comes from experience is that the AFX graft’s iliac limb extension don’t get the B-infolding that can affect an oversized stent graft placed in a small artery and it accomodates a neighbor well.

For example, take this patient who after EVAR of aortic aneurysm with AFX developed metachronous dilatation of the common iliac artery to 3.9cm with abdominal pain. The average diameter is 18.5mm. From the table, that rounds to 19mm corresponding to 283.53 square mm. If the internal iliac artery requires a 13mm graft, that is 132.73 square mm, the difference being 150.80 square mm. That corresponds to a 14mm diameter graft, but a slightly larger graft is preferred for oversizing. The external iliac artery is 8mm, and putting a 13mm Viabahn (largest available) in that would result in the B-infolding in the 8mm external iliac. Here, I bailed myself out by simply placing a 20mm AFX iliac limb extension, which by virtue of its design is resistent to infolding and tolerant of parallel grafts laid alongside in constricted channels. I found that the AFX iliac limb, a 20-13mm x 88mm length extension well suited for this.

The AFX graft limb seems to adapt to the presence of the parallel “sandwich” graft which is deployed second and ballooned last. In followup, there was shrinkage of the common iliac artery aneurysm sac and no endoleak. 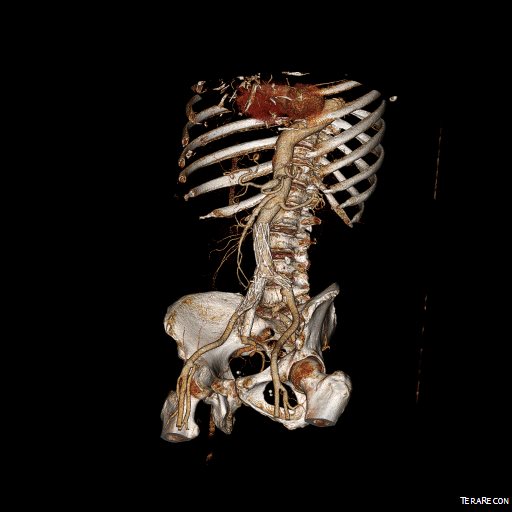 Compared to my other parallel graft case treating a metachronous saccular common iliac aneurysm years after an EVAR with a Gore endograft (link), which by table calculation, resulted in 8% oversize in calculated areas, this particular technique with a large AFX graft and an appropriately sized Viabahn seemed to work well the setting of a previously placed AFX graft. It allows one to avoid hypogastric occlusion.

The final option of a femoral or external iliac to internal iliac bypass after extension across the bifurcation to the external iliac artery is still a reasonable choice, although it seems to be receding into history.

*While these grafts are not FDA approved for use in this manner, many times, with a prior endograft or graft in place, using the currently available and approved Gore Iliac Branch Endoprosthesis (IBE) in this common scenario would still be off label usage of an approved device, and only if it is feasible, which most times is not. For nonmedical readers, many commonly available devices and medications are used off-label, such as aspirin for blood thinning.