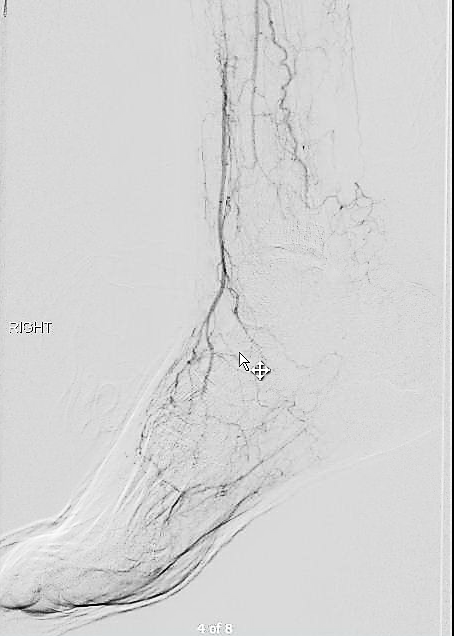 Max Wohlauer, a recent graduate, is now Assistant Professor of Surgery at the Medical College of Wisconsin in the Division of Vascular Surgery. He sent along a case which is published with his patient’s and department’s permission.

The patient is an 80 year old man with diabetes mellitus, CHF, and pulmonary fibrosis, who presents with right foot toe ulcers. He had an inflow procedure earlier in the year, but it failed to heal the ulcers. An attempt at crossing a CTO of the SFA/POP failed. Angiogram (above), showed a distal anterior tibial artery target.

Preop ABI, TBI’s, toe waveforms, and pulse Dopplers are shown. are as shown. 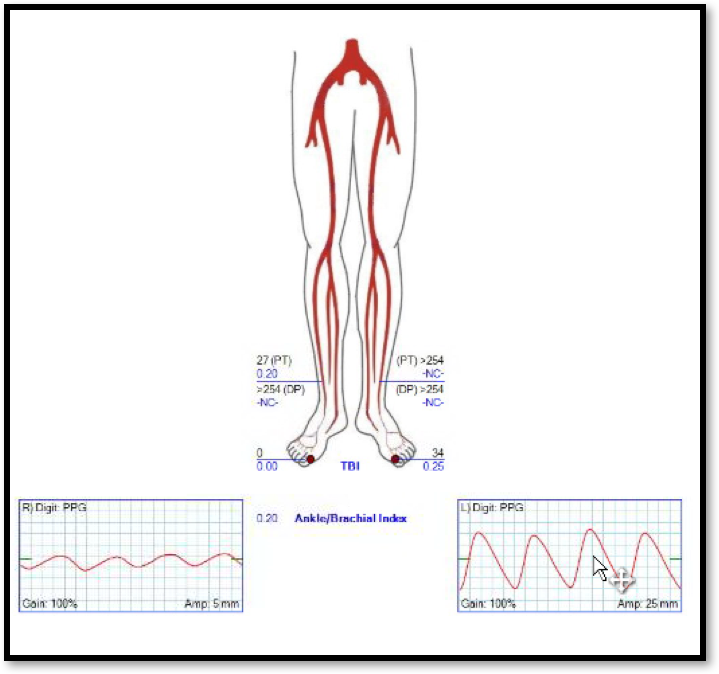 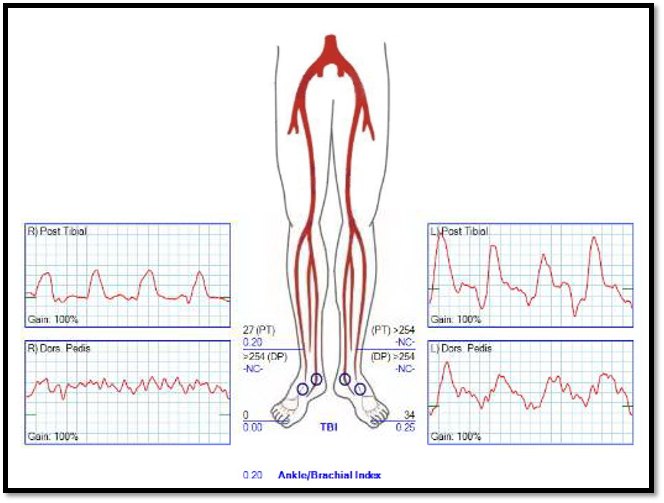 All point to likely limb loss. The TBI is 0 and the ABI is incompressible. Max planned for bypass. The saphenous vein was mapped and shown to be adequate. 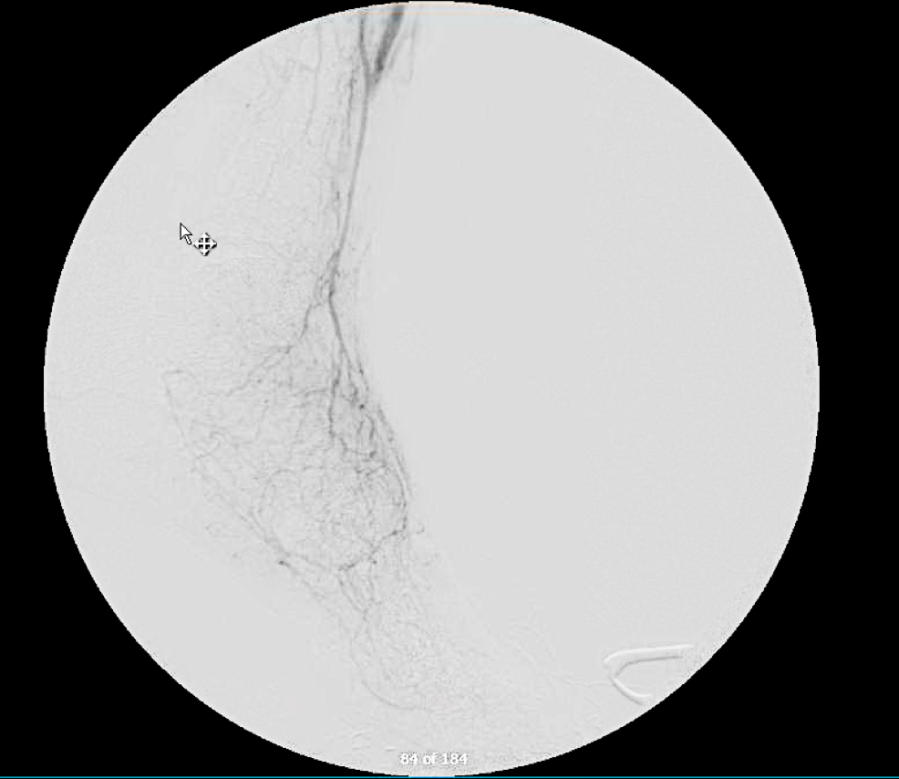 A followup duplex showed patency of the graft. 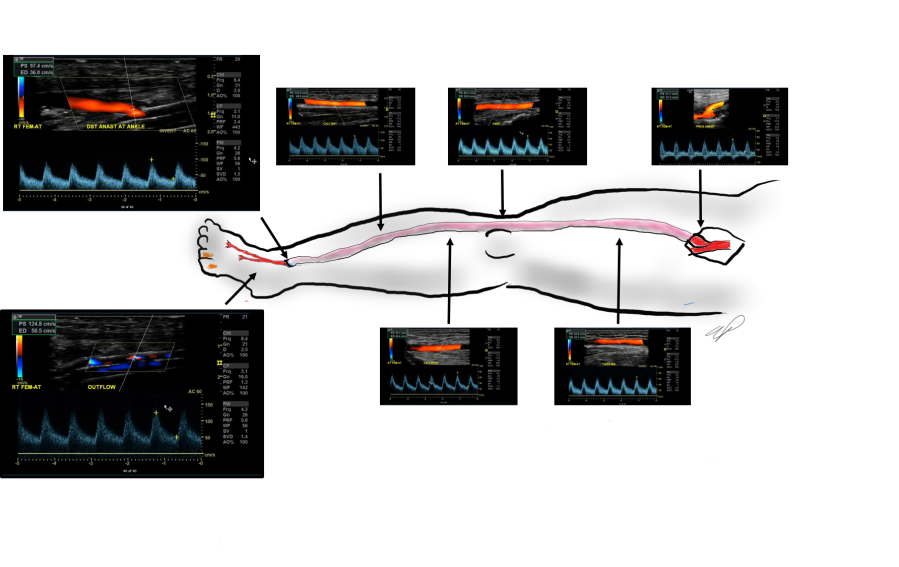 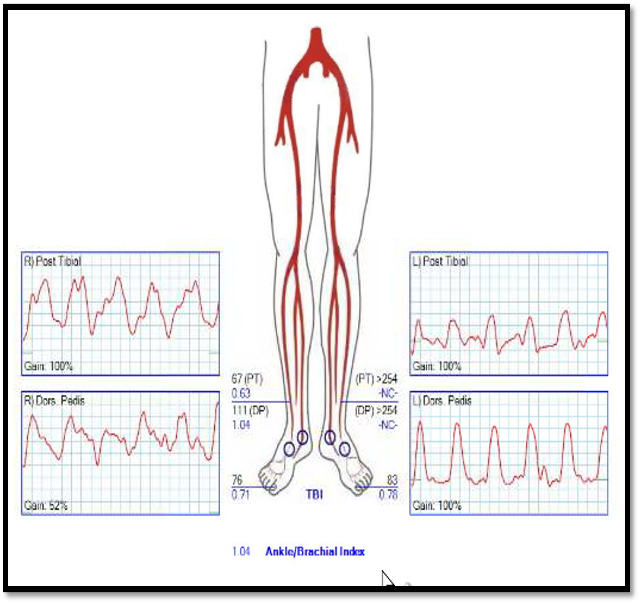 Bypasses work and are possible even in high risk individuals with good anesthesia and postoperative care. Because open vascular surgical skills are not well distributed while endovascular skills are more widely distributed, there is bias both in the popular mind and even among some catheter based specialists that bypass surgery is a terrible, no good thing. The fact is that a well planned bypass is usually both effective and durable even in high risk patients, but clearly it is not the only option.

Ongoing developments in endovascular technology bring greater possibilities for revasularizing patients. As someone who does both interventions and operations, I have seen spectacular success (and occasional failure) with both approaches, and I admit to having biases. It is human nature to be biased, but it is because of my biases, I support further ongoing study, as the mistake would be to establish monumental truths without supporting evidence. There is an ongoing randomized prospective trial (BEST-CLI) that aims to answer important questions about what approach brings about the best results in critical limb ischemia. It will bring evidence and hopefully, clarity, to this important disease.*

Finally, I am very proud to have participated in Dr. Wohlauer’s training, and look forward to seeing his evidence, experience, and even biases, presented at future meetings.

*CCF is a BEST-CLI study site.