The patient is an 80 year old woman with lung cancer who was getting a port placed at her home institution. It was to be a left subclavian venous port, but when access was not gained, a left internal jugular venous port was attempted, but after the intitial stick and sheath placement, pulsatile bleeding was recognized and the sheath removed. Hemostasis was achieved with clips and the wound closed and a right internal jugular venous port was placed. The postprocedural CXR shown above showed tracheal deviation and numerous clips from the initial port placement attempt, and a CT scan with contrast (unavailable) showed a carotid pseudoaneurysm of 3cm projecting posteriorly behind the pharynx/esophagus. She was kept intubated and sedated, and transferred for management.
On examination, her vital signs were stable. She had 2cm of tracheal deviation and swelling was apparent at the base of the neck. While my trainees may be better versed at this than I at the particulars of this, my old general surgery trauma training kicked in, as she had a Zone I neck carotid injury,

which in my experience is highly morbid despite how stable the patient was. Point again to trainees, this is no different from someone having stabbed this patient with a knife at the base of the neck. My options were:

Open repair is the approach of choice for zone 2 injuries because aerodigestive tract injuries can also be addressed and the exposure is straightforward. For Zone 1 injury, the exposure is potentially possible from a neck exposure, but in my experience, jumping into these without prepping for a sternotomy puts you into a situation without a plan B. The exposure of the carotid artery at this level becomes challenging with hemorrage from the artery once the compression from the hematoma or pseudoaneurysm is released. A sternotomy in this elderly woman, while not optimal, may be necessary if open control is required, but the best plan is to avoid this.

This should be a straightforward repair from an endovascular approach, even with the larger sheath required for the covered stents. A purely endovascular approach is problematic for two reasons. One, cerebral protection devices are built for bare carotid stents and not peripheral stent grafts, but this is not prohibitive -it should be fine. Without a planned drainage, the hematoma would be left behind which could cause prolonged intubation and problems with swallowing -both an issue for an elderly patient battling lung cancer. Endovascular access could provide proximal control for an open attempt from above, but instrumenting from the arch in an 80 year old has a known 0.5-1% stroke rate.

A hybrid open approach with exposure at the carotid bifurcation offers several advantages. With control of the internal carotid artery, cerebral protection is assured while the carotid artery is manipulated. At the end of the procedure, the internal carotid can be backbled through the access site with the common carotid artery clamped. The hematoma could be avoided until the stent graft is deployed. An unprotected maniplation in the arch can be avoided. Once the stent graft is deployed, drainage of the hematoma can be performed. This required setting up a table off the patient’s left that allowed the wire to lie flat to be manipulated by my right hand. The carotid bifurcation was accessed through a small oblique skin line incision and the common, internal, and external carotid arteries, which were relatively atherosclerosis free, were controlled with vessel loops. The patient was heparinized. The internal carotid was occluded with the loop, and the common carotid below the bifurcation was accessed and an 8F sheath with a marker tip inserted over wire. Arteriography showed the injury and pseudoaneurysm.

The location of the injury based on CT and on this angio would have baited a younger me into directly exposing it, but experience has taught me that which occasionally you can get away with it, the downsides -massive hemorrhage, stroke, need for sternotomy, just aren’t worth it. The sheath was brought across the injury and a Viabahn stent graft was deployed across the injury. 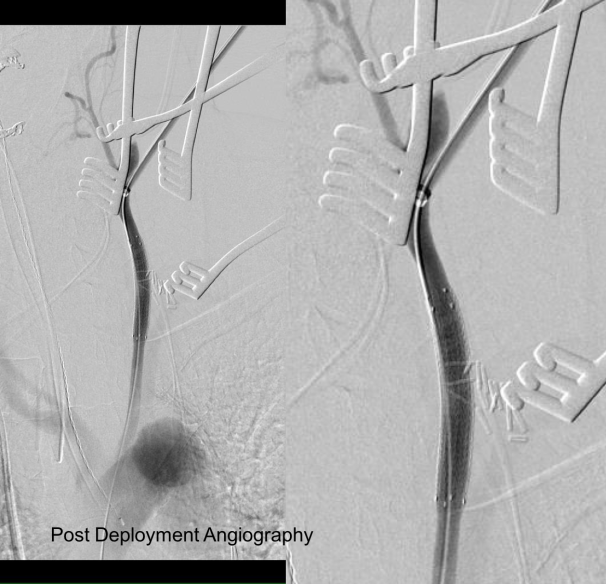 The hemorrhage was controlled and the hematoma was then exposed and drained -the cavity was relatively small and accepted the tip of a Yankauer suction easily. A Jackson-Pratt drain was placed. The access site was repaired after flushing and retrograde venting as described.

She recovered rapidly after extubation postop. She was able to breath and swallow without difficulty and had suffered neither stroke nor cranial nerve injury. The drain was removed on postop day 2.

The patient recently returned for a 6 month followup. Duplex showed wide patency of her stent.

More gratifyingly, her port was removed as her cancer was controlled with an oral regimen.

Let me start with my bias that all penetrating trauma should be approached in a hybrid endovascular OR. It is a natural setting for trauma and this case illustrates that. In a hybrid operating room, central aortic and venous injuries can be controlled endovascularly while open repair, including salvage packing, can be done. Excess morbidity of central vascular exposures can be avoided. Temporary IVC filters can be placed if indicated (becoming rarer and rarer). Cardiopulmonary bypass can be started.

In this patient, hybrid therapy brought the best of both techniques and avoided many of the pitfalls of the purely open or endovascular approach. For stable zone I penetrating injuries of the neck, it is clear that this is a reasonable approach.