The patient is a gentleman from out of state who had called about problems he was having with walking and with leg ulcers that wouldn’t heal. He is in his seventies and has a pacemaker for an arrhythmia for which he was on Xarelto. He also had type II diabetes. He had bilateral lower extremity deep venous thromboses 6 years prior requiring IVC filter placement. The filter occluded, and it resulted in sudden sharp and debilitating pain in both legs with walking short distances -some days only 50 paces.He described it as an unbearable pain in calves and thighs that felt like his legs were going to burst. He also had ulcers on his legs that would heal with ministration but soon recur. This was all despite being quite active, with regular workouts, and being fit. He was compliant with compression. He sent a CT scan done last year (below).

It showed an Optease retrievable vena cava filter that was occluded and the iliac systems bilaterally (right above and left below) were chronically occluded with patent vena cava above and femoral confluences bilaterally below.

He had no hypercoagulability nor ongoing recent DVT’s. I thought there was a good chance that we would be able to recanalize the occluded iliocaval segment and he flew in for a consultation, and he was pencilled into the schedule ahead of his visit.

Examination revealed a fit and trim man in his 70’s in no apparent distress. He had bilateral leg edema that was moderate with small superficial and tender ulcers of the right posterior distal calf. Pulses were normal. He was taken to our hybrid suite and venography from femoral vein access in the proximal thigh in the supine position revealed his right and left iliac venous systems to be occluded (below figures).

Wire access into the iliac systems was performed with Glidewire and Glidecatheter periodic venography to confirm that I had not exited the vein. Unlike the arterial system, extravasation from being extravenous does not have the consequence of bleeding, hematoma development, and pseudoaneurysm formation because of the low pressure, but it can be a long procedure and uncomfortable as well so these are done under general anesthesia.

Once position confirmed to be in the iliac vein, the vein was dilated to allow for greater ease of movement. In the case of the uncrossable filter, I switched to access from above via a right internal jugular vein access.

Once the wire crossed into the iliac vein from above, it was captured and brought out. While ballooning by itself is inadequate for revascularization, it greatly eases wire capture and on the right, it was done simply by driving the wire from above into the sheath. Wire capture wins access across the iliocaval and IVC filter occlusion from below.

Once wire access is done, ballooning across the filter is done from both sides. A large sheath is them delivered across the IVC filter. Finally, a Palmaz stent mounted on a large balloon is delivered and deployed. I chose to do this from the right access, and retracted the wire on the left -something done with some trepidation because of the great difficulty gaining this access, but with with prior balloon dilatation, reaccess is made easier. Also, plan B would be reaccess from above.

When this is accomplished, the left sided wire is reaccessed across this stent. This is the venous side analogue to gate access in EVAR (below).

Once this is done, the iliac veins are dilated to 14mm from the IVC to the common femoral arteries. large 18mm Wall stents are deployed in a kissing fashion from the caval stent into both iliac systems and dilated to 18mm.

After deployment, the Wall Stents are ballooned to 18mm. These stents were extended into the common femoral artery with 14mm nitinol stents.

Completion venography suggested successful iliocaval recanalization and revascularization but these procedures are not done without a final intravascular ultrasound (IVUS).

Intravascular ultrasound revealed incomplete expansion of the right common femoral stent. This was treated with another stent and ballooning with the result on the right.

The leg ulcer was treated with an Unna’s boot. A word about the venerable Unna’s boot –it works. The dressing dries and compresses while the Zinc Oxide prevents bacterial growth. It is interesting that the dressing is so infrequently used nowadays but not so when you consider that it isn’t reimbursed. And patients generally hate it.

This revascularization has an excellent chance at working as the patient has no hypercoagulability and had a patent common femoral confluence bilaterally. As I had mentioned in a prior post, the idea in venous revascularization is connecting confluences that serve as inflow and outflow. 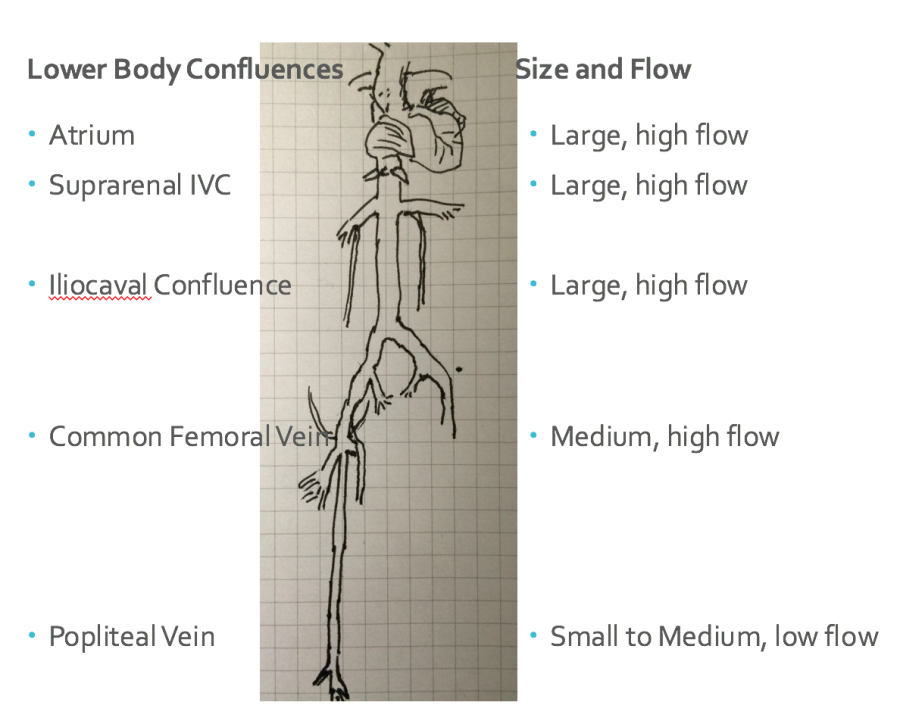 This will require followup, consisting of duplex, and it is advantageous that he is anticoagulated for his arrhythmia. It is becoming more apparent that those languishing with chronic venous insufficiency and its complications need the IVC and iliac veins interrogated with a duplex. When an obstruction is found, they should be treated with these techniques as a first line therapy.