The patient had diffuse atherosclerosis with small luminal area even in areas without calcified plaque. It predicted inaccessibility for the 22 French sheath required to deliver the 32mm C-TAG device to be placed for a symptomatic type B thoracic aortic dissection associated with a small but expanding proximal aneurysm.

My options included direct aortic puncture, an aortofemoral conduit, or an endoconduit. The aorta was heavily calcified and the bifurcation was narrowed by circumferential plaque down to 6-7mm at its narrowest and the left iliac had a severe narrowing due to this plaque. The common femoral artery was severely diseased with a lumen diameter of 4mm due to heavily calcified plaque.

I have come to favor direct aortic puncture over conduits, but the heavily calcified aorta and the absence of safe areas to clamp made me think about other options. My experience with endoconduits has been limited to revising problems of endoconduits from elsewhere, but others report it as a feasible option.

The problem with a long artery narrowed with irregular plaque and even intimal thickening is that it will readily expand to accommodate a large sheath but removing it involves the frictional resistance of the whole artery and typically the “iliac on a stick” avulsion involves the whole length of external iliac artery, likely because the common iliac is anchored by the aortoiliac plaque, the smaller diameter of the EIA, and the longer more tortuous path offering greater resistance in the EIA compared to the aorto-common iliac segment.

Remote endarterectomy, a technique involving endarterectomizing an artery through a single arteriotomy, offers the possibility of increasing the lumen of even a mildly diseased artery and reducing the frictional coefficient, assuming the remnant smooth adventitia is less resistant than rough irregular intimal plaque.

The plan was to expose the right common femoral artery and endarterectomize it and gain wire access from the R. CFA. A wire would be placed on the left iliofemoral system to protect it for later kissing iliac stents. A right EIA remote endarterectomy would be performed, and then the right aorto-common iliac segment would be balloon dilated to 8mm. 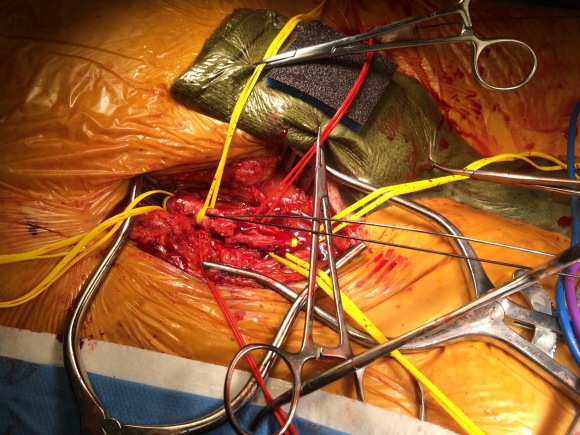 The operation went as planned. The external iliac plaque was removed in a single piece from the EIA origin. 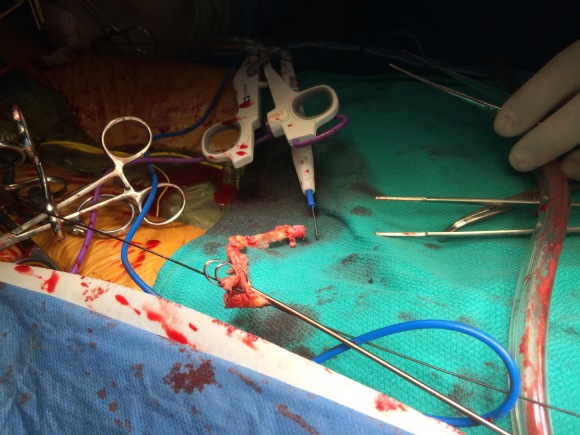 Arteriography showed the right EIA to be free of intimal disease, and dilators and ultimately the 22F sheath went in easily.

The TEVAR also went uneventully -the left subclavian which had a prior common carotid to subclavian bypass, was covered and the aneurysm and flap were excluded from the left CCA to the celiac axis. 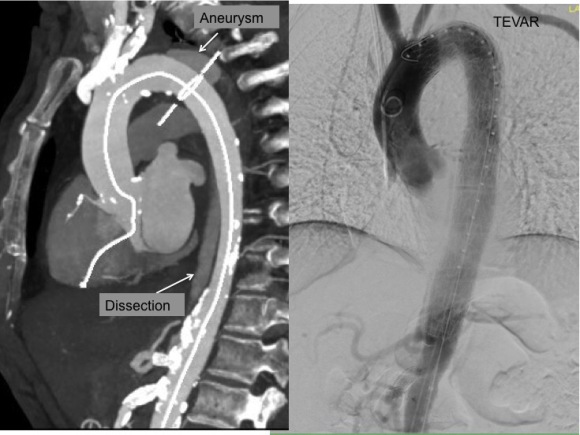 The most difficult part of the operation was removing the sheath, as is usually the case with a tight iliac, but the friction point was largely at the common iliac and not the external iliac. No artery could be seen extruding with the sheath at the groin while steady tension was applied to the sheath under fluoro. The aortic bifurcation was repaired with kissing iliac stent. The patient recovered well and her chest pain resolved.

I have done this for EVAR, including reopening occluded external iliac arteries, and even for a 26F access for TAVR, avoiding the need for placement of a conduit in selected patients.

Addendum: in followup, I had the chance to check up on the repair -the EIA remained large and patent. 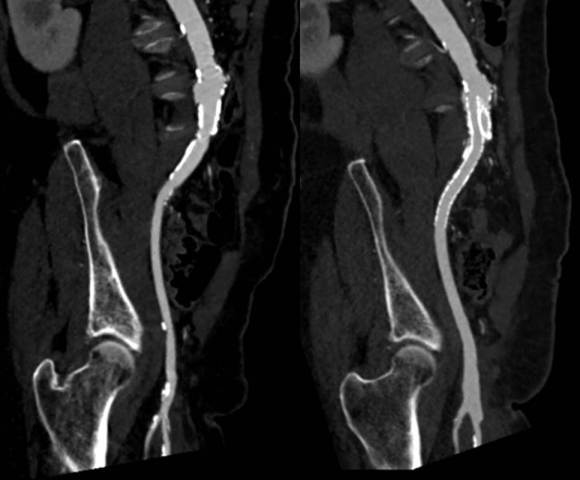