Our debranch first technique described by Dr. Niranjan Hiremath and was presented at CX Aortic in Vienna in October. Hoping to collect multicenter experience with this technique.

The innovation of sabremetrics in baseball management and finance as described in Michael Lewis’ wonderful book Moneyball wasn’t just the ability to quantify skill to predict outcomes, it was the ability to assemble that skill without overpaying. For a baseball team on a budget, spending all your payroll on a superstar makes no sense when you can get equivalent quants of skill in a statistical aggregate of no-name players with proven metrics. Rather than pay for an A-Rod, you can recruit, and pay for, 5 players that in aggregate, statistically achieve what you would get with a healthy A-Rod, so the thinking goes. How does this translate into vascular surgery? Can we arbitrage complication rates?

The open repair of type II thoracoabdominal aortic aneurysms is a heroic endeavor, putatively best done by surgeons wearing cowboy boots, and classically comes with sobering complication rates that exceed 20% for death and paralysis. Is it possible to reduce this risk by subdividing this most enormous of cardiovascular operations into component parts?

The patient is a middle aged man in his 50’s who presented with a type B aortic dissection. His dissection flap spanned from his left subclavian artery to the infrarenal aorta. He was a long time smoker and had hypertension that was difficult to control, made much worse after his dissection. He had a moderate dilatation of his thoracic aorta, maximally 36mm and tapering to 35mm in visceral segment. There was a 4.9cm infrarenal AAA where the dissection terminated.

His chest pain resolved with blood pressure control and he was discharged, but in followup his thoracic aortic segment grew and his blood pressure worsened, never getting below a 150mmHg systolic despite multiple agents. CTA two months after presentation, showed growth of his TAA to 44mm from  36mm in two months  and the visceral segment showed that his dissection flap impinged on flow to the right renal artery. His AAA remained the same. He continued to have bouts of chest pain related to hypertension.

Twenty years ago, the board answer would have been to replace the whole aorta. In young, otherwise healthy man who had been working in road construction up to the dissection, he would have been considered a candidate for a direct open repair of the type II thoracoabdominal aortic aneurysm. From the landmark paper out of Houston by Dr. Svensson in 1993, open type II TAAA repair was associated with about a 10% death rate and 30 percent paralysis rate. Waiting a few months for the aneurysms to grow further in this patient, in the 90’s this patient would probably have ended up with an open TAAA repair. Good thing we have better options.

The goals of modern therapy are to treat the urgent indication while holding off repair of less critical segments of the aorta, and to do so in a way that each operation builds on the previous one.

This patient needed a left subclavian artery debranching and then TEVAR of his dissecting thoracic aortic aneurysm, and intervention on his right renal artery. We did this in one setting performing first a left carotid subclavian artery transposition and then percutaneous TEVAR from the left common carotid artery origin to the supraceliac abdominal aorta.

The completion aortography showed good deployment of the CTAG device from the left common carotid artery origin to the celiac axis origin. The false lumen was no longer visualized. The right renal artery which was narrowed was treated with a balloon expandable stent.

The TEVAR was done percutaneously, minimizing the overall time in the operating room. The technical details of the transposition can be found in the excellent paper by Dr. Mark Morasch. 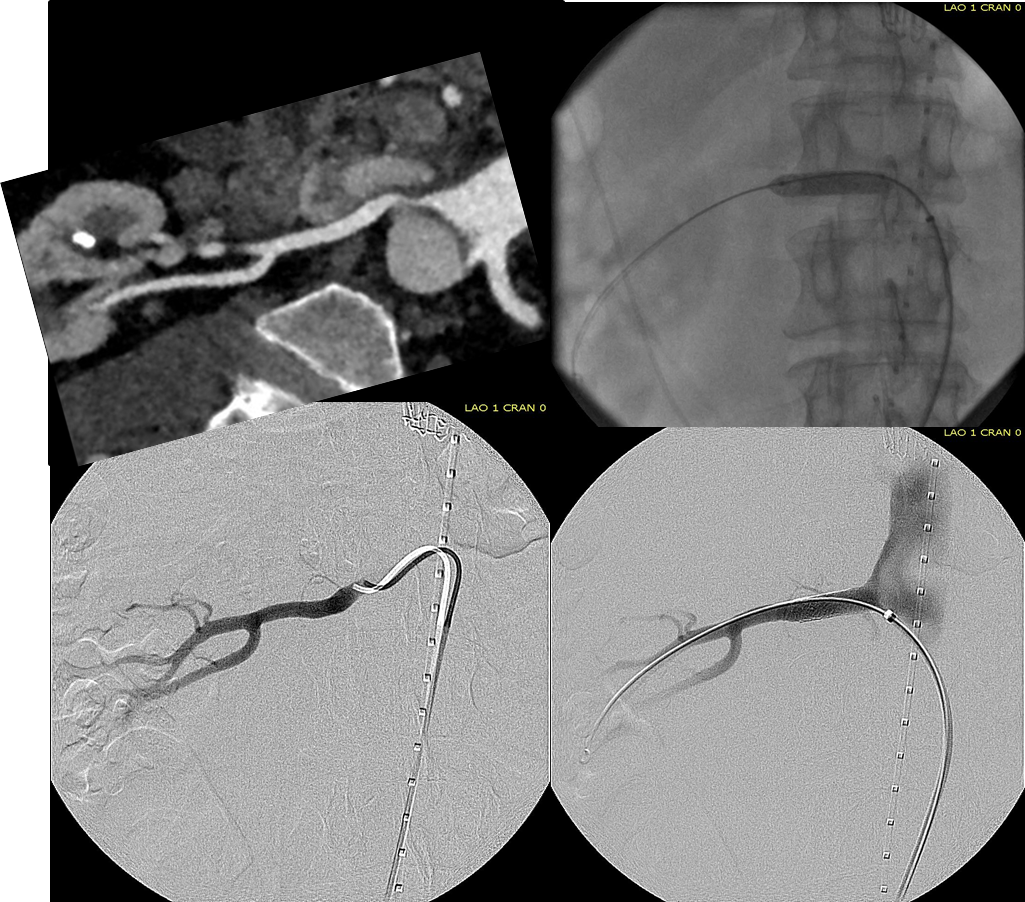 When I do this procedure for acute dissection, I quote the patient a general risk of stroke, paralysis of about 2-5% and death of 1-2 percent for someone with low cardiopulmonary risk like this patient had. He recovered rapidly and went home post op day 5.

He at 6 month post TEVAR followup, CTA showed stablility in his thoracic aorta. in infrarenal AAA grew from 5.0 to 5.7cm between the 1 month CT and the 6 month CT. 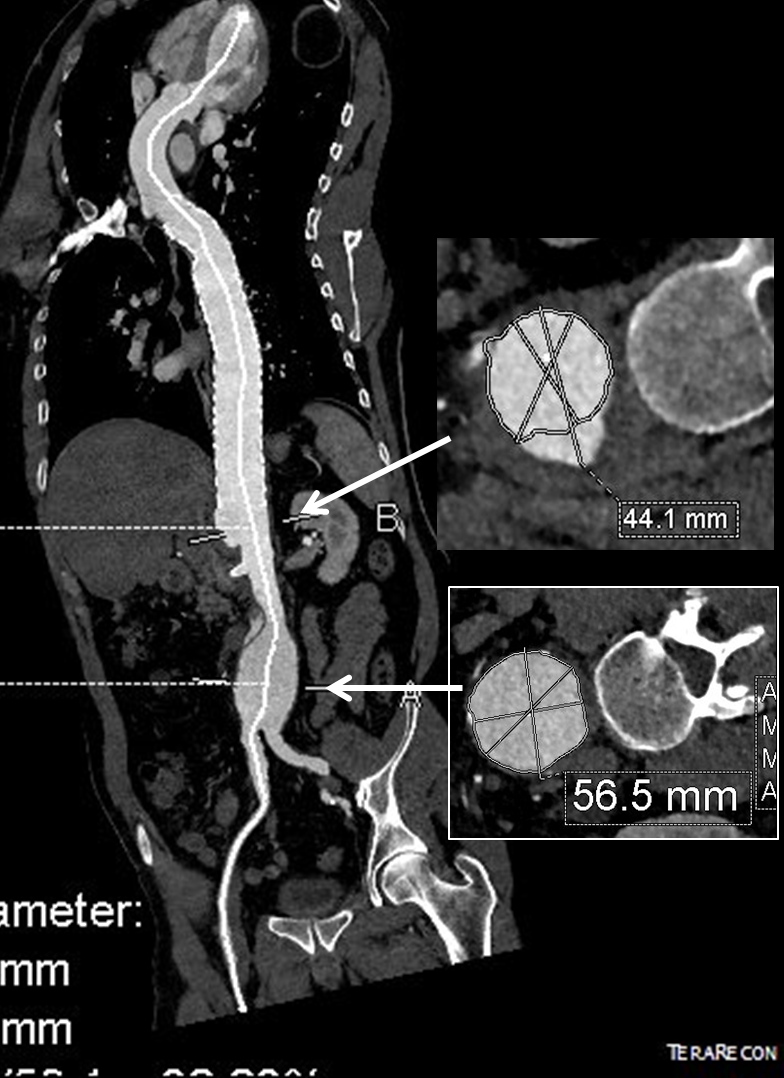 The terminus of the stent graft excluded the false lumen in the thoracic aorta but also resulted in filling and pressurization of the false lumen beyond and can be seen as a 44mm lateral dilation of the visceral segment of the aorta which had developed in the 6 month interval since the TEVAR.
The infrarenal neck continued the dissection and had dilated to about 36mm, but was parallel for a good length above the AAA. I decided to treat the inrarenal aorta with direct transabdominal repair. This would allow me to fenestrate the aorta, and possibly prevent further growth of the viseral segment while reserving the retroperitoneum for the visceral segment repair if it came to it. The neck diameter was 36mm. His operation was performed via an anterior approach with the patient supine. A tube graft repair was performed expeditiously and included resecting the dissection flap up to the clamp. Care was taken to avoid injury to the renal stent. The proximal anastomosis went well – the dilated aorta yet had strong tissue strength. A felt strip was used to buttress the aortic side of the anastomosis. The estimated risk of paralysis was less than 1% and risk of death was less than 2%. The patient recovered uneventfully and went home on POD 5.

He did well in subsequent followup, having successfully quit smoking. He retired early on disability and was becoming more active, but the visceral segment dilatation was concerning. At 6 months post infrarenal AAA repair, he underwent CTA and it showed patent thoracic stent graft and infrarenal abdominal graft. The intervening visceral segment continued to enlarge and was now 46mm. The decision was to wait another interval 9 months to see if this would stabilize. The segment grew some more and was 49mm. He wanted to give it another 6 months and at that time, CTA showed further growth over 5cm, and he had developed some abdominal discomfort. He was taken to the operating room.

A four branch repair of the visceral segment thoracoabdominal aortic aneurysm was performed. The diaphragm was taken down and the stent graft was clamped as was the infrarenal tube graft. A premade Coselli graft was used to bypass to the right renal, SMA, celiac, and left renal in those order. The patient had a CSF drain for the case which was removed on postoperative day 2. He recovered rapidly and went home on postoperative day 6. His estimated risk of paralysis was about 2-5%, mitigated by a protocol centered on CSF drainage and blood pressure control. His risk of death was 5%. Telephone followup reveals the he is pain free at a month out and functional nearly at baseline.

This illustrates the notion that three smaller operations in an aggregate over three years achieved the equivalent of the single big open type II TAAA repair.

The idea is to make each step achievable -like coming down a mountain taking three days on well marked paths rather than base jumping off the summit.

Clearly, the patient was younger and a fast healer, and credit must also be given to the anesthesia/critical care team who see high acuity cases in volume every day and not every patient can expect to have such short stays and excellent outcome, but these are far more likely if operations are planned out in such a manner.

At last week’s Veith Symposium, there was a straw poll for parallel grafts versus fenestrated stent grafts in emergent setting, and the results were a populist parallelist majority. This is clearly the result of years of inability to access this technology and reflects market forces making the decision over careful science. There are clear examples of this in the past -the adoption of laparoscopic cholecystectomy and appendectomy, done without randomized control trials shows that RCT’s be damned, people and surgeons will get what they want. 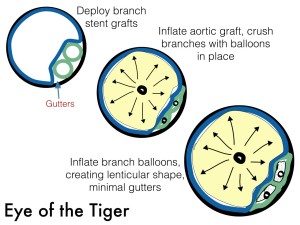 The several presentations on parallel grafts caught my eye. First was the Eye of the Tiger technique which sounds like a kung-fu move. Presented by Dr. David Minion of the University of Kentucky, the gist of it is that the gutters created by parallel grafts can be obviated by reshaping the branch grafts from circles to lenticular shapes (illustration). The sequence of moves is to deploy a balloon expandable stent graft outside of the main graft and deploy it, then deflate the balloon. The aortic graft is then ballooned, crushing the branch graft. With the balloon inflated, the branch graft is then inflated, now taking a lenticular configuration. This, I will put in my tool box.

The other presentation was on the bullfrog catheter, by Dr. Christopher Owen of UCSF. It inflates to press the catheter portion of it in the middle of the length of the balloon against the stent graft wall. A penetrating needle then comes out through the graft material, allowing for infusion of a sealing embolic material. This has not been tried in humans but application in an animal model is ongoing.

I have a feeling parallel grafts will be with us for a while. Using these in conjunction with the Nellix graft, juxtarenal aortic aneurysms were treated, which brings me to think that with the inevitable progression of paravisceral segment aneurysm disease, we will be seeing secondary endobags (not a pejorative) for treatment of paravisceral aortic aneurysms with parallel grafts, and we will see something like this on CT scans one day (illustration). Mr. Ian Loftus of St. George’s Vascular Institute reported on 19 patients (11 single, 5 double, 3 triple branch) over 12 months who were unsuitable for OR/EVAR solutions, treated with 100% technical success, one type I endoleak. Dr. Michel Reijnen presented the Arnhem experience with this technique. Their series included 7 patients with juxta (5) or para (2) renal AAA’s (4 single, 2 double). He reported 100% chimney graft patency and no reinterventions in short followup. He presented a case of rupture, but warned that further investigation would be needed before using the endobag for rAAA.

I think that the whole issue points to several truths. Paravisceral and thoracoabdominal aortic aneurysms have always been viewed with trepidation and this generally caused referral of these cases to high volume centers and surgeons during the open era. Experience with EVAR has infused a sense of confidence and with mastery of infrarenal EVAR and basic endovascular interventions, most practitioners feel ready to offer an endovascular solution to the visceral segment AAA’s, but feel locked out either through lack of training or inability to access the devices, particularly not having ready solutions on the shelf. These parallel graft systems offer relative ease of delivery and use readily available components. Even I have resorted to parallel grafts in an emergency with acceptable short term result (patient lived) but with uncertainty with durability.

I think that there will never be a completely satisfactory off the shelf, “every-surgeon” solution because these patients are no less complex when approached with endovascular technique -they just present a different set of equally difficult challenges. As in open repair of these complex aortic aneurysms, endovascular repair of these should aggregate to high volume practices and centers with deep experience.