This patient is a 90 plus year old man who developed ever worsening claudication to the point he was disabled and more worryingly, had developed pain over his left heel. His ABI’s were severely diminished.

CTA showed that he had an occluded SFA with above knee reconstitute, but also had only single vessel runoff to the foot via a heavily diseased posterior tibial artery that had serial mild to moderate stenoses. 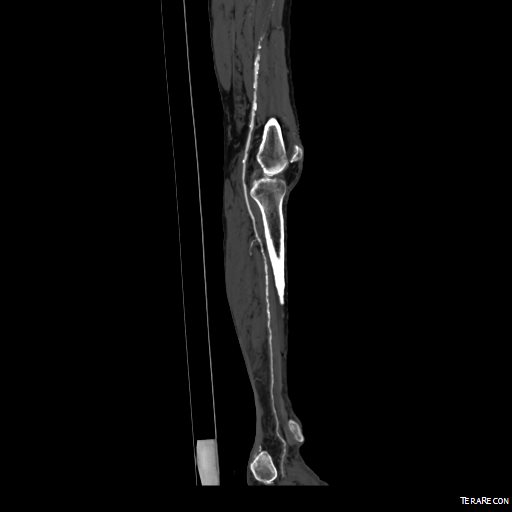 An attempt at endovascular recanalization was performed at an outside institution, but the SFA lesion could not be crossed. Bypass was not a good option -the ipsilateral saphenous vein had been harvested for CABG, and a long operation was going to have a significant impact on this patient who also had mild dementia and drank 2-3 glasses of wine a day. It is not uncommon to have a successful operation, but have the patient lose 2-3 months in recovering from the physical effects of a long operation as well as from perioperative delirium.

I felt that removing the occlusive plaque from his arteries offered a minimally invasive solution. The plaque was easily accessible via an oblique, skin line incision in the groin, and clearance could be performed from the external iliac artery origin to the planned endpoint slightly beyond Hunter’s canal. While the outflow was not perfect, in my experience, aside from a single native vein bypass, long segment restoration of vessel elasticity results in very acceptable patency rates.

The common femoral artery plaque is usually contiguous with plaque in the external iliac artery and surgeons who perform a lot of CFA endarterectomy have various maneuvers to remove as much plaque as possible, up to stenting the end point of the plaque down to the endarterectomy patch. I have never been satisfied with this because the EIA behaves differenty than the CIA (am looking into this!) in my experience and placing stents even minimally across the inguinal ligament is not desirable. Sending the dissector up to the EIA origin frees the plaque to be removed completely with the CFA plaque. The clip below shows the Vollmer Ring dissecting plaque up to the EIA origin. I do this over a wire in the pelvis because in the rare instance of leak or rupture, rapid control is possible without having to open the abdomen.

Once freed, the cutter is used to transect the plaque and the end point is tacked down with a stent at the distal common iliac/EIA origin which is a better place for a stent than the inguinal ligament.

The PFA in this patient did not require endarterectomy and reconstruction, but if it did, I would have made the arteriotomy go onto the profunda from the CFA. The SFA plaque is then mobilized with the Vollmer ring. I don’t do this over a wire, but have a definite end point in mind based on what I see on CTA.

The CTA (images earlier) shows that the above knee popliteal artery has no significant calcified plaque. This doesn’t mean there isn’t fibrotic plaque. Cutting the plaque as in the clip below results in a coned in antegrade dissection which has to be crossed in the true lumen.

This is technically the most difficult part of the EndoRE procedure and it requires good imaging and wire skills. The trick here is that an ultrasound guided puncture of the popliteal or tibial vessel can give you distal true lumen access if needed. It was not necessary in this patient. The better maneuver is if the end point is surgically accessible is to cut down and tack down the plaque and patch the arteriotomy. 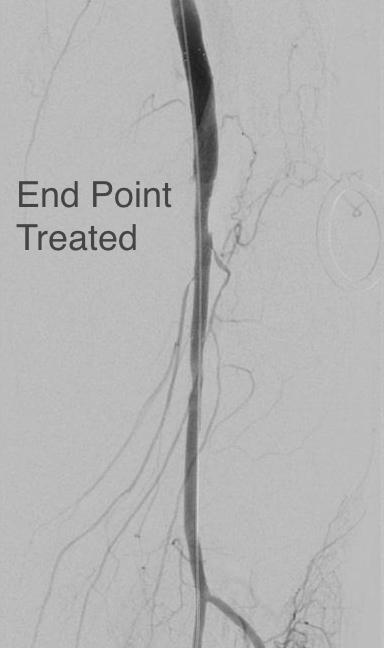 The patient regained multiphasic PT and DP signals at the end of the case, after the common femoral artery was patched and flow restored. The small groin incision was closed with a running absorbable monofilament after multilayer deep closure. The patient had a blood loss of 50mL. An ilioinguinal field block and local anesthesia provided excellent pain control. Postoperative ABI was improved to 0.82 from 0.34 and all pain was relieved. The patient felt good enough to go home on postoperative day 1.

This illustrates what I feel to be a best application of both open and endovascular techniques. The above knee popliteal stent is short and in a position that is not going to result in fracture. The external iliac stent is in a protected position in the pelvis and quite large -10mm, which I expect will stay open for the life of the patient. The profunda femoral artery, the rescue artery, is widely patent, and numerous collaterals off the SFA have been restored to patency which I feel aid in maintaining the patency of this repair, along with the restored elasticity of the artery which mimics the biomechanics of autologous vein.

In most patients with compromised outflow, I start warfarin along with ASA at 81mg. Because of his age, I opted for Plavix+ASA. These fail with the development of random TASC A restenoses along the SFA which are amenable to balloon angioplasty. The role of drug eluting balloons in this situation is unknown but theoretically promising. Occlusion through thrombosis does not result in embolization and limb loss as in failure of prosthetic bypass grafts (another option in this patient), but rather leaves a situation where endovascular thrombectomy or lysis is technically feasible.

The great thing is that this is by far superior to stenting of a TASC D femoral arterial lesion.