The patient is a 60 year old with severe peripheral vascular disease. Risk factors included smoking, hypertension, and type I diabetes. The patient had developed gangrenous eschar over toes 1, 2, and 3. He had had prior bilateral femoropopliteal bypasses with saphenous vein, which was occluded on his symptomatic side, and stent grafts had been placed on his distal femoral to popliteal artery, but these were occluded. He also had chronic edema with some early lipodermatosclerosis and pitting edema. He was emaciated and had a low prealbumin.

The femoropopliteal stent grafts were occluded but the popliteal artery reconstituted into a diseased set of tibial vessels -only the posterior tibial artery remained patent into the foot and remained as a target. 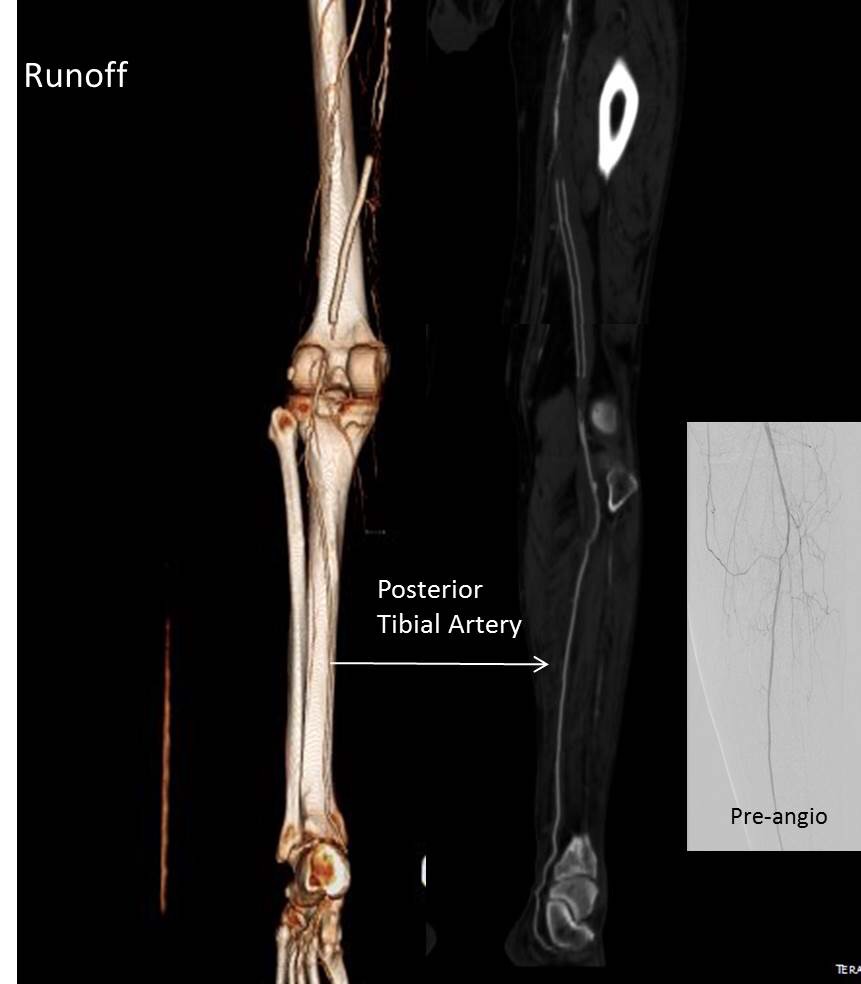 The preoperative vein mapping suggested there was an acceptable anterior thigh tributary vein and marginal segments of vein below the knee. Arm vein was available as well.

Exploration showed that the anterior thigh vein was thin walled and became diminutive in the mid thigh. The infrageniculate veins were numerous and too small. I thought I might have enough for a short bypass from a recanalized mid SFA.

The remote endarterectomy of the external iliac and stenting of the common iliac went without complications. I do this over a wire to ensure access in case of rupture. A postop CTA shows the results in the aortoiliac segment.

Remote endarterectomy of the SFA went smoothly but was held up by calcified plaque above the occluded stents.

I cut down on the SFA and found that the vein from the thigh would be short. I mobilized the plaque and re engaged the Vollmer ring and was able to dissect the stents. By starting another dissection from the below knee popliteal artery, the stent was mobilized and removed.

The figure below shows the procedure angiographically. I used a tonsil clamp to remove the mobilized stents.

The common femoral and mid SFA arteriotomies were repaired with patch angioplasties. The infrageniculate popliteal arteriotomy was used as inflow to a very short reversed vein bypass with the best segment of thigh vein to a soft posterior tibial artery.

The patient had a palpable posterior tibial artery pulse at the ankle. CTA predicted the plaque found in the tibioperoneal trunk which compelled me to do the short bypass. In my experience, remote endarterectomy, sometimes with short single segment bypass, successfully restores native vessel circulation without need for lengthy multisegment arm vein bypass. Remote endarterectomy of the external iliac artery avoids the difficult CFA plaque proximal end point that often requires stenting across the ligament down to the patch. Only a single common iliac stent is required. I generally anticoagulate these patients with warfarin, especially if they are likely to resume smoking or have poor runoff. I hope to show this is the equal of multisegment vein bypass, and superior to it by virtue of avoiding long harvest incisions which are the source of much morbidity and now readmissions which are penalized.