From my case files, this was a case which I performed in 2010 and published in a prior blog.

CCx: Patient is a 56 year old man with complaints of pain in right leg with walking short distances and discomfort in the foot at night.

HPI: The patient has had cramps in his right calf with walking about a block for over a year, but over the past three months, he has developed pain with walking less than half a block which is incapacitating. He has developed pain at night which wakes him and he has taken to sleeping with his right foot dangling off the edge of the bed. This has resulted in some swelling of that leg which makes it doubly uncomfortable to wear shoes. He works as a manager at a local big box store and walks constantly. He used to smoke but quit last week. He feels this has worsened the pain.

Past Surgical History: Ruptured appendix at 22

Plan: After discussing treatment options, we decided to try a right external iliac artery remote endarterectomy with angioplasty and stenting of his common iliac disease. This was chosen over aorto-bifemoral bypass because he had limited time off from work and work did require that he lift more than 20 pounds.

This operation was done via a single right groin exposure and percutaneous access of the left groin. The common femoral artery had severe posterior plaque which was the starting point of the endarterectomy. Up and over access of the right external iliac artery was achieved and a wire was passed across the occluded external iliac artery and into the right femoral system. With clamping of the common femoral artery, the wire was brought out and controlled with a Fogarty clamp -this allowed for excellent stabilization and control and possible emergent balloon occlusion in the case of a perforation.

A Vollmer ring dissector was sent over wire and plaque up the external iliac artery under fluoroscopy and dissection was stopped at the iliac bifurcation which was heavily plaqued. A Moll Ring cutting device (LeMaitre) was used to transect the plaque which was removed. 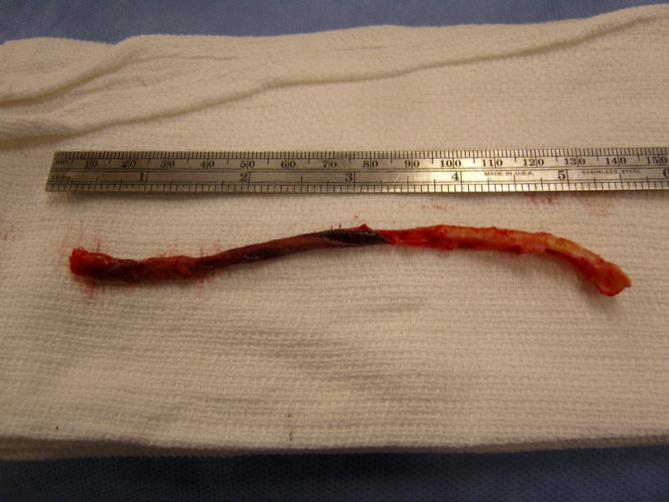 The right and left common iliac arteries were stented with self expanding nitinol covered stents and post-dilated. I chose this as I have had occlusions occur in the setting of diffuse TASC C disease with low density plaque -I suspect that thrombus propogates across open cells like weeds growing through chicken wire. The stents on the right were extended across the iliac bifurcation.

A completion angiogram is here to the right. The common femoral artery was repaired with a patch angioplasty (bovine pericardial patch, LeMaitre).

The groin was closed and the patient recovered and was discharged in a few days with excellent palpable pulses on the right and improved pulses on the left. He was without symptoms of claudication or rest pain in the right leg.

Remote endarterectomy allows for removal of plaque via a single groin incision, obviating the need for an abdominal exposure required in an aorto-bifemoral bypass. This minimally invasive technique is associated with a low complication rate and earlier return to full work status because the abdominal incision is avoided.

Smeets et al [reference] reviewed with 7 year experience with 48 patients and had a technical success rate of 88%. One patient died due to a myocardial infarction within 30 days of the operation. The complication rate was low. 6 patients required coversion (retroperitoneal flank exposure) for additional arteriotomy (3 patients) and bypass (3 patients). The primary and assisted patencies shown to the right were acceptable with a secondary patency of 94% at 3 years.

These cases require more surveillance than an aortobifemoral bypass. Intimal hyperplasia does occur in random loci in the SFA remote endarterectomy and this should apply to the external iliac artery. I chose the title because the external iliac artery biologically behaves like the superficial femoral artery in relation to endovascular patencies and not like the common iliac artery or aorta -probably because it shares a common embryology with the SFA, not the CIA. It is a troublesome artery that is often overlooked by vascular surgeons when femorofemoral bypass is performed for occlusive disease -the supplying external iliac artery though patent is usually diseased and has a small lumen. With a fem-fem bypass, both legs are supplied often through an artery with the caliber of a child’s drink straw. I have seen the donor leg become symptomatic through what is termed steal, but in fact reflects the hemodynamic inadequacies of a diseased external iliac artery.

I feel that 5mm is the minimal lumen caliber for an external iliac artery, and a 4mm lumen in an adult will clearly show a hemodynamic effect particularly after exercise or application of vasodilators in the endo suite. Stenting an occluded external iliac artery though technically feasible even in this case is not a durable solution in my experience. This operation allowed the patient to return to work without an extended convalescence.

I think removing the plaque offers advantages over stenting to the inguinal ligament. The common iliac stents have superior potency to external iliac artery stents and moving the stent point to the CIA and not stenting the EIA in my experience has better long term potency.