The patient had a successful EVAR or an eccentric infrarenal AAA which in followup grew due to the presence of a type II endoleak from the inferior mesenteric artery. This was seen on the CTA and duplex ultrasound. Planning for assessment and treatment involved analyzing the CTA in centerline, tracking the source of the arterial blood flow into the sac.

The centerline from the SMA into the middle colic artery shows a meandering but patent path via the Arc of Riolan to the left colic artery to the inferior mesenteric artery. In my experience this is straightforward to access selectively from the femoral approach, but it illustrates for the trainees the concept of building up access which I refer to as building the intervention machine.

The first step in the access involves getting stable footing in the SMA. Selective access can be performed with a shaped catheter, and once accessed, a Rosen wire is used to track in a curved long sheath. Parking this sheath in the proximal SMA forms the foundation of this machine. The next step is access into the middle colic artery. 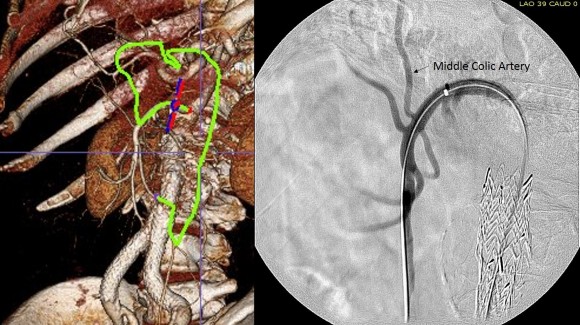 The CTA is particularly helpful in identifying the middle colic on the 3DVR projection. Selection of this is straightforward with a an angle catheter which I place a Tuohy Borst connector. This is the second stage of the machine, because further access with 0.35guage wires and catheters could result in spasm. This second sheath access (the Tuohy turns the catheter into a sheath) of the middle colic allows for selective 0.18 gauge catheters and wires to make the final step to the IMA and the AAA.

The embolization with NBCA sealed the IMA and the cavity in the AAA sac. This was checked with intraoperative duplex, done with a transabdominal aortic probe.

Transabdominal aortic duplex is easier on sleeping patient and potentially gives more information than arteriography alone.  The patient in followup had no endoleak and demonstrated sac shrinkage.

The access machine concept is important for planning interventions. Every major branch or turn needs to be crossed by your ultimate access sheath, if you want to avoid having to arduously reaccess those points, and building up a telescoping layer of sheaths is very handy. Every interventional case is done at some distance away from the access point on the skin, and so some though has to be given to how you will build that machine.

With this example, I have shown that you can readily access the AAA sac from the SMA. An earlier article showed iliofemoral access via the hypogastric artery (link). I will give in an upcoming post how this can be done laparoscopically in under 20 minutes.

[…] not the inferior mesenteric artery which can be treated endovascularly (link) or laparoscopically (link). CT scan suggested that it was one of those anterior branch vessels that one would encounter in […]