The patient had undergone an uneventful EVAR, but in followup had developed AAA sac growth. Pictured above are the post deployment CT’s from 1 month and 6 months. Reviewing the original aortogram, you can see that there was flow into the sac very late via an iliolumbar collateral.

Plan was made for arteriography and intervention. As discussed in an earlier post, 3D VR was very helpful in planning access to the type II endoleak, particularly in plotting C-arm angles and access vessels. 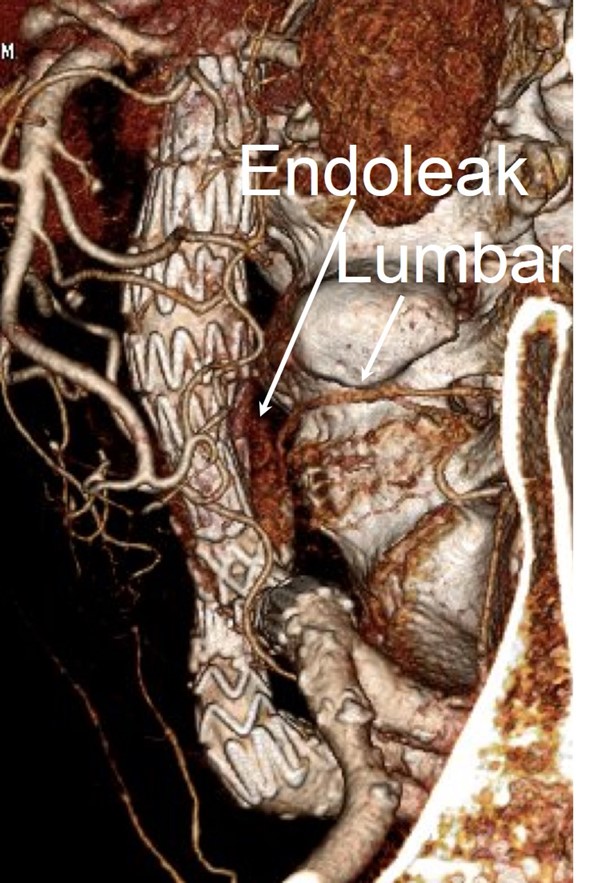 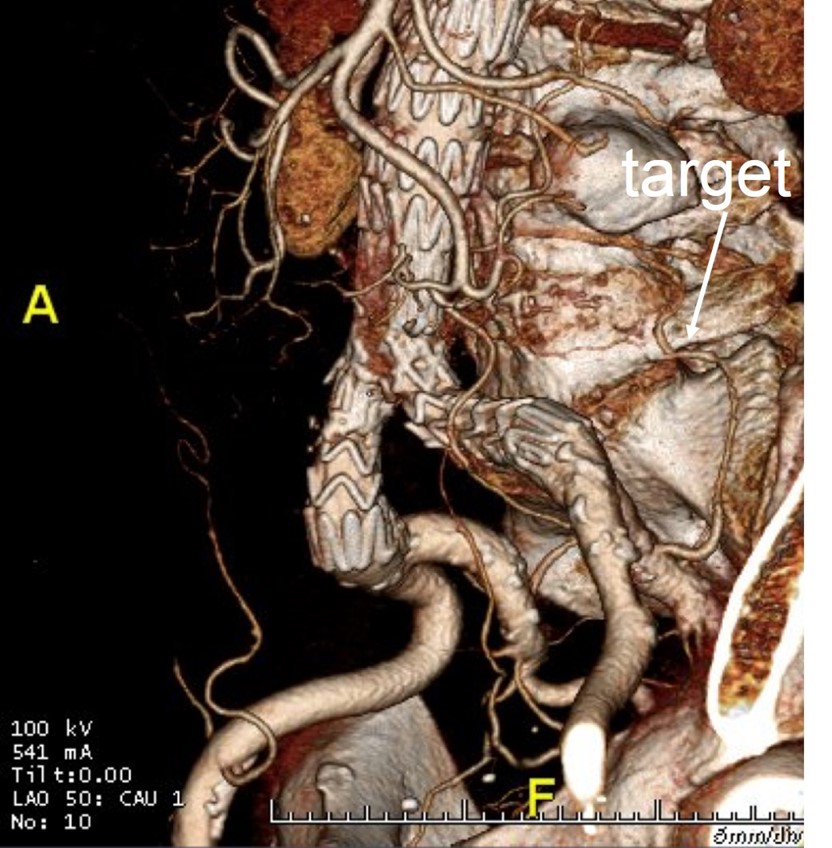 The 3D-VR image view on Aquarius Intuition (TeraRecon) predicts a camera angle of 50 degree LAO to see the branch leaking to the lumbar vessel causing the leak.

Initial aortography confirms the absence of a type I or III leak in early phase. 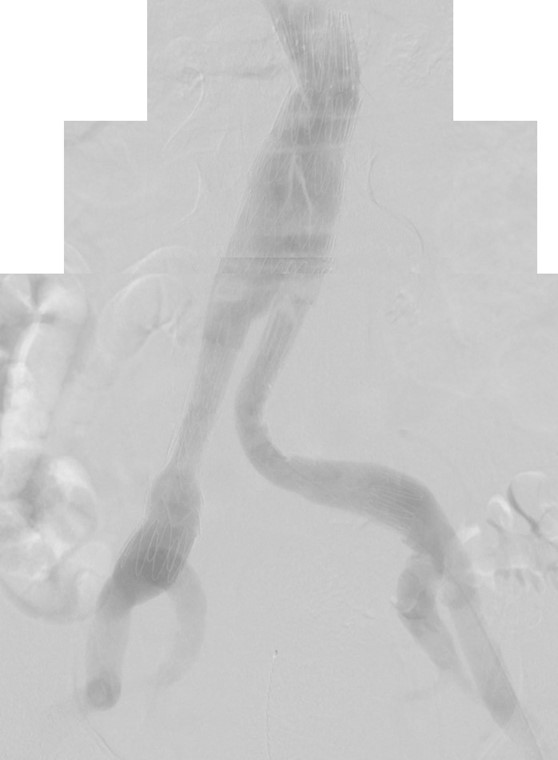 Later in the phase, the endoleak can be well seen, corresponding to the CTA. 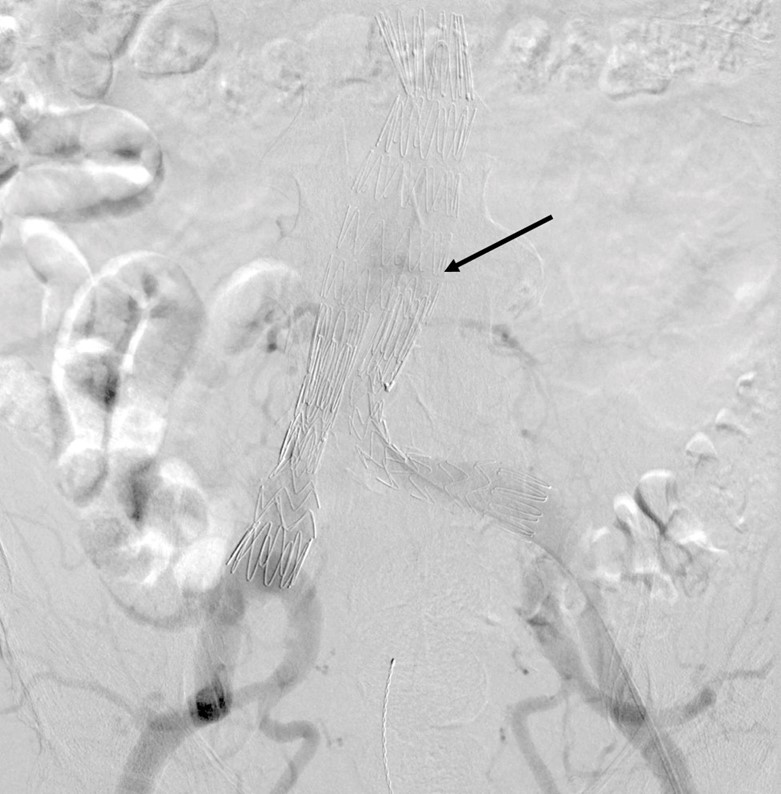 I do an intraoperative transabdominal duplex of the aorta. I have submitted this technique for presentation and eventual publication, but briefly, using an abdominal probe on the abdomen, the sac and endoleak can be readily visualized, and the source of the leak confirmed.

The inferior mesenteric artery which is so often involved is not in this case, and can be easily seen with duplex in patients who are NPO and under general anesthesia. I perform these studies myself, as they are far less challenging than when a patient is awake.

Selection of the branch vessel is straightforward as the CTA well illustrates the course of the source iliolumbar vessel. The CTA even showed the loop that was challenging to traverse. The sequence of access involved IIA, branch access with a glide catheter, placing a Rosen wire for anchorage, and pushing the sheath over the glide catheter into the branch vessel, giving stability. Further access into and across the loop was then possible with superselective catheters based on an 0.18 wire system. 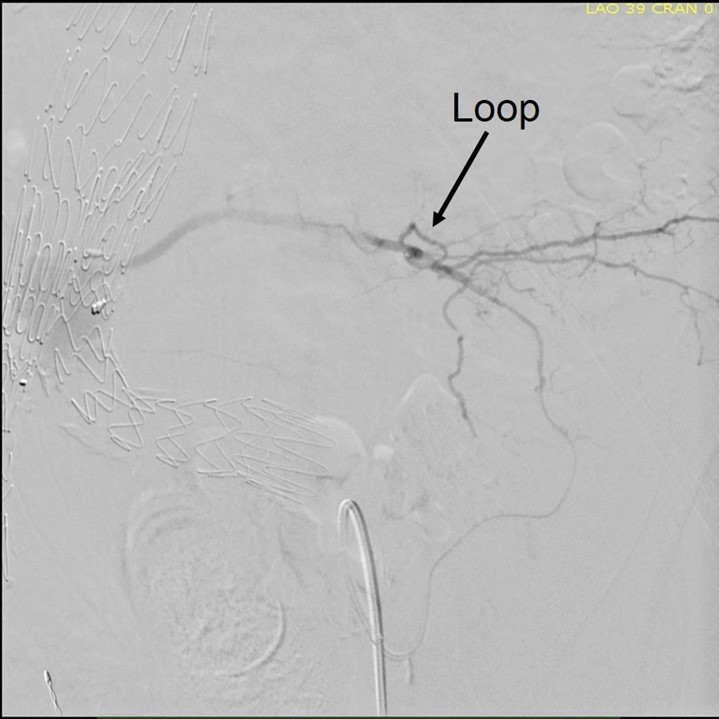 Once access into the AAA sac was achieved, coil embolization of the leak cavity chased by glue (NBCA) allowed for obliteration of the endoleak. 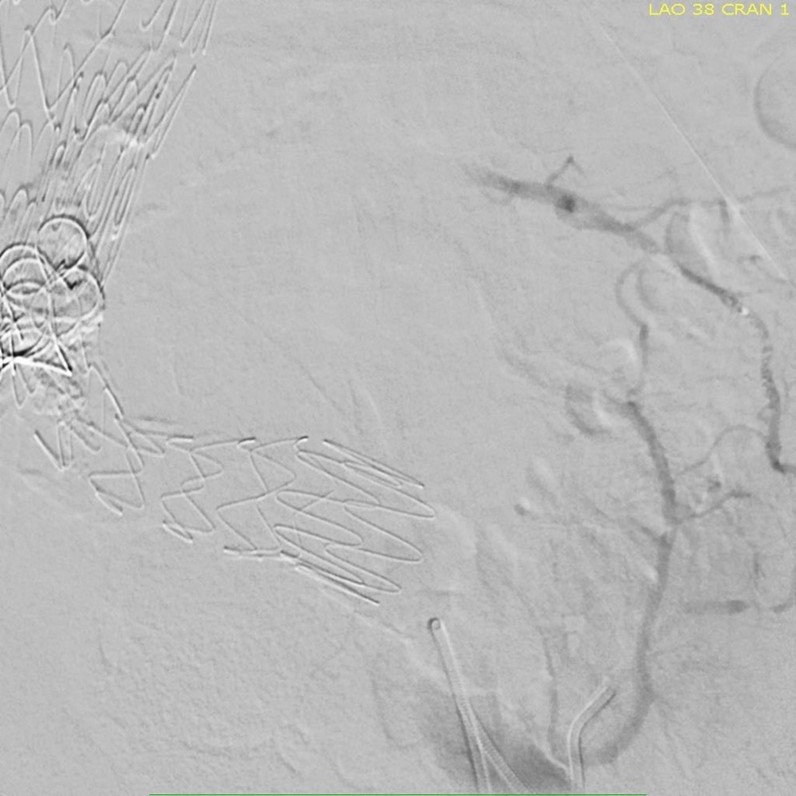 Using duplex in this fashion adds another dimension to the treatment imaging and has the potential for reducing radiation dose and contrast volume.

The patient in followup has shown sac shrinkage. The other treatment options are: direct lumbar puncture, open surgery with sac marsupialization and oversewing of leaks, and laparoscopic ligation of lumbar arteries. I have tried all of these, but this went as easy as could be expected and I credit the ability to visualize the entry path in 3 dimensional virtual reality. The toughest part was negotiating the loop, but a shaped 0.18 glide wire simplified this.

In 2006, Sheehan et al [J Vasc Surg 2006;43:657-61] reviewed an 7 year experience from 5 academic centers. 1909 patients had EVAR with various endografts, and there was an overall 15% rate of type II endoleak. Most resolved within the first year. No significant variation by endograft design appeared to correlate with type II endoleak, which makes sense, although TALENT graft had the highest rate. Spontaneous resolution was common. Late endoleaks were frequent. No conversions were due to type II endoleak. Higashiura, Greenberg et al [J Vasc Interv Radiol 2007;18:975-981] reviewed the CCF experience with the Zenith graft and type II leaks. Of 204 patients with suitable followup, there was a 17% rate of early type II endoleak. Of these, only a 7 of 18 patients with persistent leak developed sac enlargement. Most type II endoleaks spontaneously resolved in followup. No variables could predict persistence of type II endoleak. Treatment prevented sac enlargement.