Patient is a 43 year old woman who had been having bouts of severe left sided abdominal pain for several years with worsening episodes of nausea and vomiting resulting in several visits to the emergency room. She has also had microscopic hematuria. Gastrointestinal workup including gastric emptying study, esophagogastroduodenoscopy and colonoscopy were negative, as was a workup for kidney stones. Eventually she was referred to my clinic for management of nutcracker syndrome. She denied lower abdominal pain nor excessive menstrual bleeding.

On examination, she was tender over the left kidney and flank. Laboratory examination was positive for microscopic hematuria. CT venography (below) showed an obstruction of her left renal vein by the superior mesenteric artery. Drainage via gonadal vein was not demonstrated, and no pelvic varices or complex of retroperitoneal veins was apparent.

Duplex showed the narrowing in the left renal vein and spectral Doppler showed elevated velocities across the compression caused by the superior mesenteric artery (below). The collecting system was not obstructed. 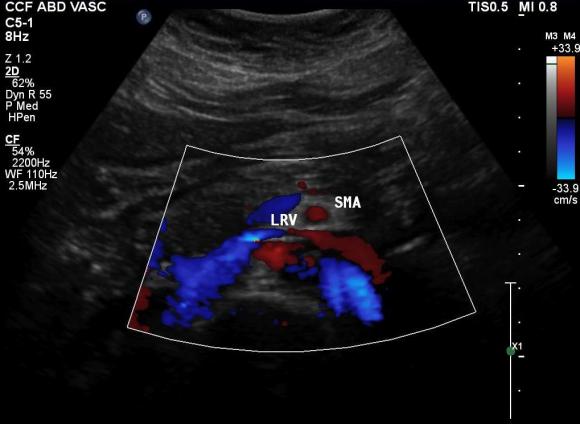 Treatment options included endovascularization with a large stent in the left renal vein, left renal vein transposition to a lower position on the inferior vena cava, left renal autotransplantation, and left nephrectomy. Stent placement comes with a degree of risk for cardiopulmonary embolism which may require a sternotomy to fish out an errant stent. The risk for this in the US is because the largest nitinol stents available are 14mm in diameter which might result in undersizing in a vein that could easily dilate to well over 20mm. Larger nitinol stents for venous applications are available in Europe but currently are not approved in the US (yet). Wall stents, while certainly wide enough, have the problem of being long and stiff when not fully deployed. A 22×35 Wall stent may be 50mm long if deployed inadvertently into a tributary vein or contrained at the narrowing. Because it slides easily, passing balloons in or out can cause it to slip out of position. Because this stent elongates when compressed and packed, deployment is challenging and it is prone to “watermelon seeding,” a set up for embolism. It does have the virtue of easy reconstraining.

My friend and recent host for Midwest Vascular Surgery Society Travelling Fellowship, Dr. John V. White, in Chicago, seems to have solved this problem by a multistep process of predeploying a temporary suprarenal IVC filter, deploying a stent (whatever fits), leaving the filter as a protection against stent migration for 4 weeks until the stent permanently seats itself through scarring/intimal ingrowth, then removing the filter.

I chose to perform venography and renal vein transposition. The patient was placed in a supine position on a hybrid angiographic operating room table and her right femoral vein was accessed. She was placed in 15 degrees reverse Trendelenberg which is about the upper limit possible. Venography below.

The films showed left renal vein compression by the superior mesenteric artery with outflow via the ascending lumbar vein, both supra and infrarenal tributaries. A midline exposure was performed and the retroperitoneum opened as in an transabdominal aortic exposure. The vena cava was exposed, and the left renal vein was mobilized by ligating and dividing its tributaries. A point 5cm below the tributary point was marked on the IVC, and this was the target for transposition. 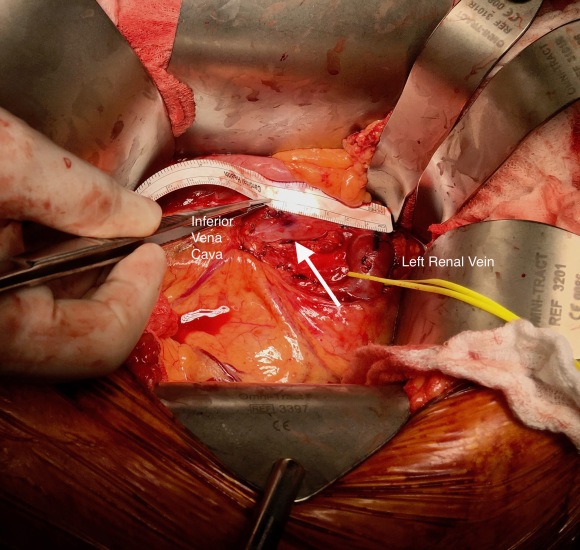 After heparinizing and clamping, the renal tributary was taken with a 5mm cuff –this would ensure proper length without narrowing the IVC.

The vein was anastomosed and flow was excellent by pulse Doppler. 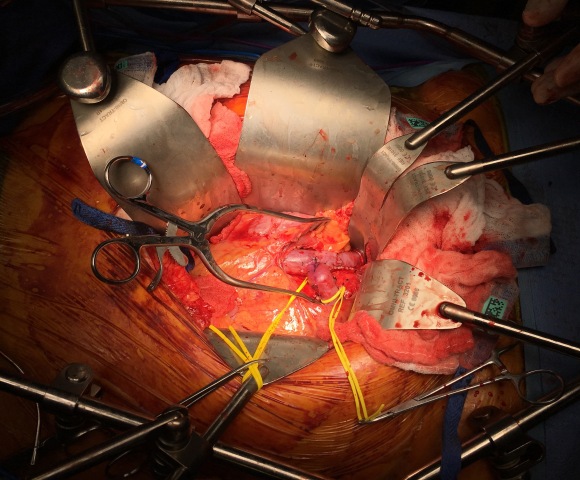 She recovered well but had a longer stay because of an ileus, being discharged on day 5. Because she lived at a distance, and came back for followup the following week prior to boarding a plane for home. She no longer had the left sided abdominal pain and there was no hematuria. CT showed excellent drainage through the transposed vein.

Followup will be periodic (6 monthly) renal venous duplex from home. Given that there was minimal tension on the repair, I expect this to do well.

Nutcracker syndrome is one of the many unfortunate consequences of our bipedal lifestyle. The small intestines hang like baggy sausages off the branched stems of the superior mesenteric artery (SMA), and in some individuals, the SMA compresses the left renal vein against the aorta. The left renal vein receives up to 12-15% of cardiac output via the left kidney, and with outflow obstruction, drains the blood through small collaterals. The renal venous hypertension results in swelling of the left kidney with subsequent left renal colic -with flank and abdominal pain, nausea, and vomiting. There is hematuria which can be gross or microscopic. With drainage via an incompetent gonadal vein, varicoceles can occur with discomfort in men and pelvic varices with pelvic congestion syndrome can occur in women.

Diagnosis is challenging because it is one of the relatively rare non-gastrointestinal causes of abdominal pain (table).

A history of left sided abdominal pain, flank pain, nausea, vomiting, associated pelvic pain, and episodes of hematuria are diagnostic. Examination is typically positive for left renal tenderness and flank tenderness. Laboratory examination include urinalysis for hematuria. Duplex, while technically challenging, will show renal venous compression with velocity elevation or loss of respirophasicity, CTA will typically show obstruction of the left renal vein with filling of collaterals, as will MRV.

Venography should be done in a stepwise manner (White protocol) to fully demonstrate the maldistribution of blood. That is the key word, maldistribution. I learned from my fellowship with Dr. White that performing venography in as upright a position as possible recreated the pathophysiology, the physics, particularly for pelvic congestion and nutcracker. Remember, this is a disease of bipedalism, of upright posture. Many negative studies done supine become positive, as the contrast will fall to where it prefers to go. As I have stated in the past, on the venous side, demonstrating drainage has different imaging needs than demonstrating flow. Pathologic venous drainage has three characteristics:

While pressure gradients are nice if they are large, they are difficult to assess when they narrow to 1-2mmHg, particularly if they vary with cardiac cycle and respiration. Because we are assessing drainage, the distribution of contrast and the direction it goes is particularly important, and far more sensitive than pressure measurements.

Venography was done per a modification of Dr. White’s protocol for pelvic congestion:

I have started transposing gonadal veins when they have enlarged from chronic reflux (link, ref 2). Renal vein transposition was chosen because her ovarian vein was competent and too small to transpose (ref 1-3). While the patency rate of stents in veins seems to be acceptable, long term data is unavailable. Also, venographic appearances are deceiving -see the in-vivo measurement of the left renal vein after dissection:

The variability in diameter and length of the Wallstent in the 22-24mm diameter range makes this a challenging deployment. Given that I would not be able to closely follow this young patient, I felt compelled to recommend a durable solution (ref 4).

I’ve been helping take care of a 52 year-old woman who has been chronically ill for some years. She was recently diagnosed w/ Nutcracker Syndrome and Fibro Muscular Dysplasia, has a history of making kidney stones that are surgically removed, experiences severe pain in her kidneys and liver even though tests show them to be normal, and also experiences severe neurological skin burning pain (with alternating with sweats and chills), itching and nausea. Moreover, after having had several abdominal cavity surgeries, she has needed surgery for adhesions, and believes they have grown back and contribute to her pain.

The medical system is failing her, as its participants don’t know what to do. Most of her days she spends in bed literally rocking back and forth and moaning in pain.

Of course you cannot examine and diagnose her, but I wonder if her symptoms point to some further tests or treatments?

Do you know of someone in the San Francisco Bay Area who is adept at adhesion surgery that you could recommend?

She has seen two vascular surgeons who examined images of blood flow to the brain and kidneys and they feel that any blood restrictions are too minimal to warrant surgery.

I thank you for any guidance you can provide.

Hi Dr.Park, are you still doing lrvt? Do you still feel the same way about stents? And for the finale, what do you think about lovt? I had a veno which showed ncs, enlarged gonadal vein. So confused about which way to go. Thanks! Great site

No one therapy is suitable for all, but in general, for younger patients, operative drainage of the kidney has the best longevity. The current available venous stents are not FDA approved for use in the renal vein and sizing is challenging as it is a contributor to external erosion (too big) or cardiuoembolization (early, too small). How they behave over a 6 decade period is unknown. The established methods of renal vein transposition, ovarian vein transposition, and autotransplant depend on the anatomy, but work well to preserve kidney function and relieve pain from a swollen kidney.