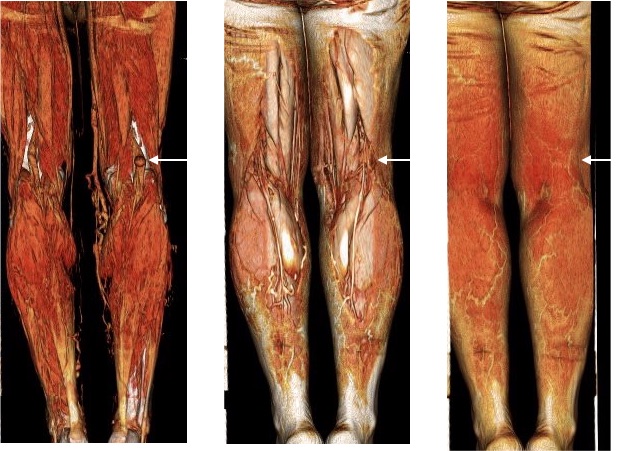 Patient is a middle aged man with history of DVT and PE who in preoperative workup for another operation was found to have a popliteal venous aneurysm affecting his right leg. Unlike the recently posted case (link) which was fusiform, this aneurysm was saccular (CT above, duplex below). Popliteal venous aneurysms have a high risk of pulmonary embolism because: they tend to form clot in areas of sluggish flow and once loaded with clot, will eject it when compressed during knee flexion.

When I perform open vascular surgery, I tend to get a CTA not just because it is minimally invasive and convenient, but because it gives important information for operative planning. The volume rendering function, which takes the 3 dimensional data set from a spiral CT scan, and creates voxels (3 dimensional pixels) of density information and creates stunning images such as the one featured on the current September 2016 issue of the Journal of Vascular Surgery. But these are not just pretty pictures.

In fact, I use these images to plan open surgery, even to the location of incisions. Vital structures are seen in 3D and injuries are avoided. Take for example the CT Venogram on the panel below. By adjusting the window level, you have first the venographic information showing the saccular popliteal venous aneurysm on the left panel, you can also see where it is in reference to the muscles in the popliteal fossa. The greater saphenous vein and varicose veins below are well seen.

By adjusting the level, subcutaneous structures are better seen including the small saphenous vein which could be harvested to create a patch or a panel graft from a posterior approach. A final adjustment of the window level on the right shows the skin, and I can now plan the curvilinear incision.

By changing the orientation, I can also recreate the surgeon’s eye view of the leg in the prone position (below).

And you can see how well it matches up to the actual operation shown below: 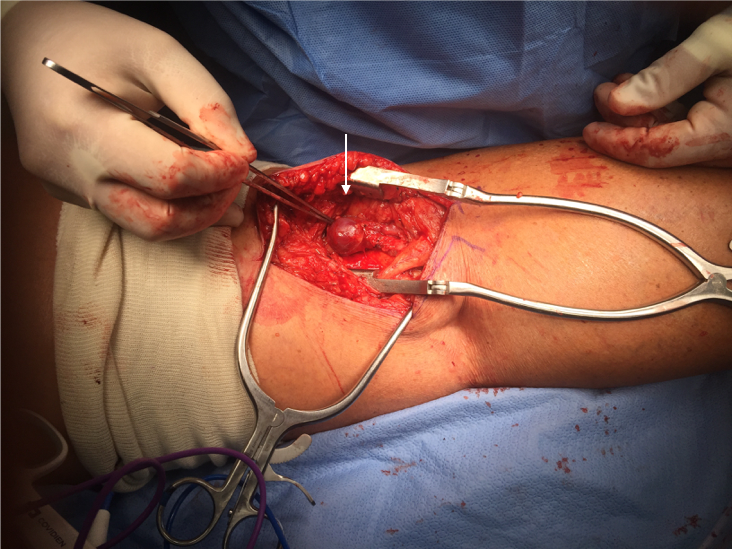 This was treated with plication of the saccular aneurysm and unlike the fusiform aneurysm, I did not sew over a mandrill (a large 24F foley) inserted through a transverse venotomy, but rather ran a Blalock type stitch under and over a clamp.

The several weeks postoperatively showed no further trace of the saccular aneurysm.

The volume rendering software grew out of the 3D gaming industry. The voxel data that paints flesh and bone on skeletons and costumes and weapons is far more complex than what is applied for the 3DVR packages that are available. The images shown for this post comes from TeraRecon/Aquarius, but they are also available as open source software from Osirix, Vitrea, and various software packages sold with CT scanners. While those that are tied to the scanners are often tied to dedicated workstations -limiting you to going to Radiology and taking over their workstation, many will work in the cloud for both the DICOM data and for virtual desktop access through mobile. Contrast is not necessary if the patient has kidney dysfunction -the vessels can be manually centerlined -ie. a line can be dropped in the center of the artery to illustrate its course when viewing the VR images.

I will plan the surgery while in the clinic with the patient, actually tracing out the incisions and dissections necessary to achieve success. It is a wonderful teaching tool for trainees. But most critically, it helps me imagine the operation and its successful completion.