The figure above shows the summarizes the problem that brought the patient to his local hospital and triggered his transfer to our acute aortic syndrome unit. The concept is that all chest pain of cardiovascular origin gets intake through a vast intensive care unit staffed by cardiovascular intensivists. Stabilization, workup, transfer to operating room or interventional suite all happens in an ICU that encompasses almost a city block.

The patient is an older middle aged man with sudden onset of back and abdominal pain. He was on coumadin for a prior SMV thrombosis and treatment for a ruptured appendicitis -antibiotics with plan for staged appendectomy. CT at his local hospital revealed a type B aortic dissection (TBAD) that extended into his superior mesenteric artery.

The aortic dissection terminated in the infrarenal aorta. The celiac and SMA had true and false lumen perfusion, the right kidney was perfused through the false lumen, the left through the true. Both legs received true lumen flow.

The dissection started at the left subclavian artery origin. The false lumen compressed the true lumen up at the proximal descending thoracic aorta. This is an important finding because in this configuration with much of the filling of the dissection from the distal reentry sites, the false lumen acts like a pressurized, compressive lesion. With time, the adventitia around the false lumen may become aneurysmal if the false lumen fails to thrombose or obliterate. When the dissection is acute, the flap may cause a direct obstruction to flow or a dynamic one that depends on the pressure difference between true and false lumen.

In this patient, thrombosis occured in the SMA beyond the origin due to dissection and decreased flow. This was consistent with the patient’s complaint of generalized abdominal pain and examination findings of pain out of proportion to the exam, indicating acute mesenteric ischemia.

He was taken to the hybrid operating room. Right groin access was achieved and wire access to the arch was achieved. IVUS (Intravascular ultrasound, Volcano) was used to confirm the location of the wire -I believe this is an important adjunct as simply passing the wire doesn’t guarantee travel up the true lumen.

A conformable TAG endograft (CTAG, Gore) was delivered through a 24F sheath into position. Two devices were used to cover the thoracic aorta from the left subclavian artery to a position immediately above the celiac axis. The left subclavian was partially covered -the bare stents covering the rest.

This excluded the proximal entry tear of the TBAD. IVUS (image below) showed improved lumenal diameter of the true lumen into the SMA. Once this was done, wire access into the SMA was achieved. This was technically challenging from the groin, and the backup plan was access from the left brachial artery which had been prepped. With patience, 6French access into the SMA was achieved. The origin was stented with a balloon expandable 8mm x3cm stent -sizing was based on IVUS and CT. This creates an alarming arteriogram as the stent appears oversized on subsequent runs -it is important to remember that the false lumen still takes up space beyond. Arteriography located the thrombosed segment and the reconstituted SMA beyond. 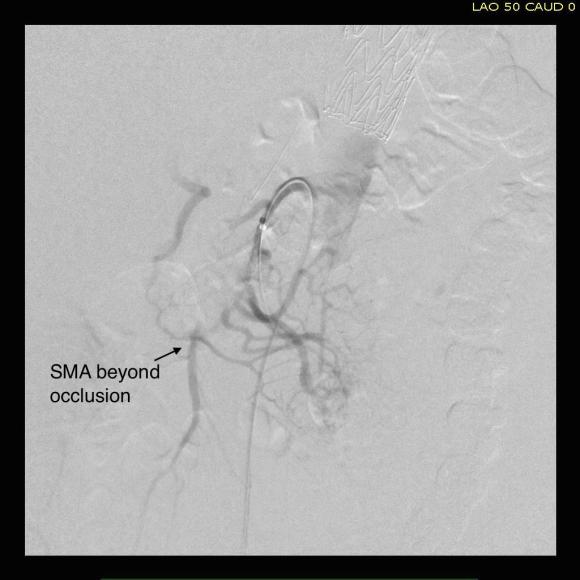 Wire access was achieved across the thrombus. At this point, I had a range of options for thrombectomy including simply aspirating which retracting a catheter. This was not optimal as I could lose subsequent wire access or reenter the false lumen. The other option was an open thrombectomy and patch angioplasty -the thighs were prepped in case we had to harvest vein. Again, in the setting of dissection and going into the mesentery, an open revascularization while feasible, is challenging.

Thrombectomy catheters like Angiojet were available, but I chose to try the Export aspiration catheter (Medtronic). It is simple to set up and goes over a 0.14 wire. It is designed for the coronaries which have a similar lumenal diameter as the SMA. It worked well in this setting in retrieving thrombus which had a pale element that may have indicated some chronicity. 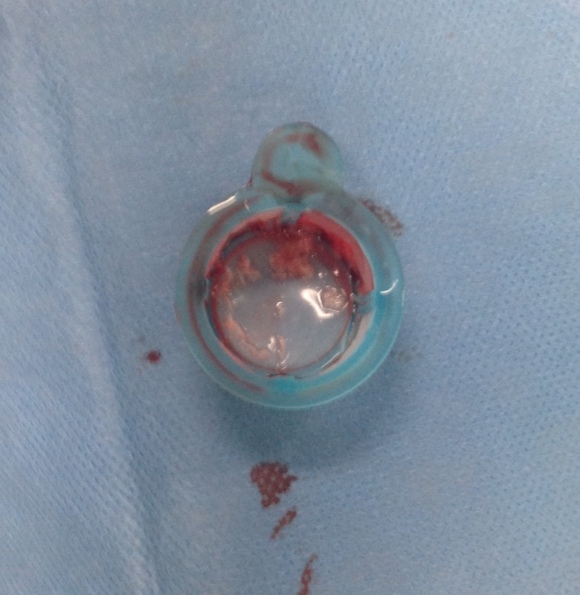 The completion arteriogram was satisfying.

The SMA completely filled as did the celiac axis and both renal arteries. I opted not to treat the right renal artery as we had given 250mL of contrast, and it was filling well without intervention. The patient was making excellent urine and his blood pressure had been maintained with mean arterial pressures above 70mmHg. At this point, IVUS confirmed good deployment of the stent. 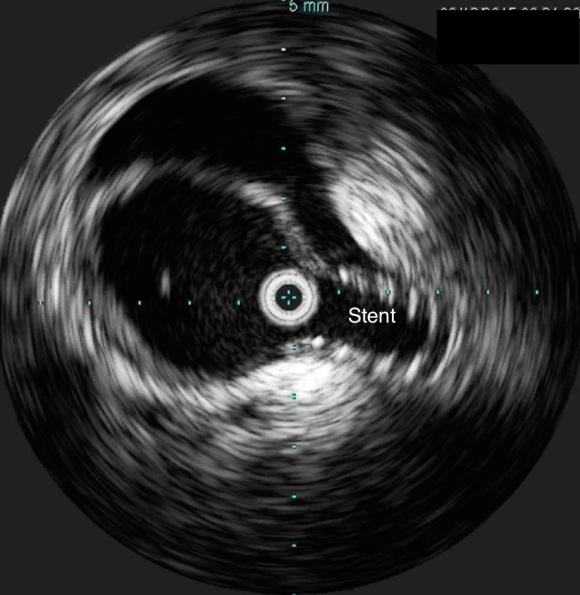 The sheath was removed and the access site repaired. The general surgeons explored the patient and found all the bowel to be well perfused with pulsatile flows seen in the mesenteric arcade. The appendix was removed.

On waking, the patient was noted to not move his legs. A spinal drain was expertly placed by our cardiac anesthesia staff and his blood pressure was raised to MAP’s above 80. He recovered motor function in his legs soon after. I usually don’t place preop CSF drains in this scenario in the presence of good pelvic circulation, no history of infrarenal aortic interventions, and patency of the left subclavian artery. That said, with TEVAR of TBAD, there is a small incidence of paraplegia (1-5%) which I emphasize in my preoperative discussion.

He was started on heparin anticoagulation postop because of his history of SMV and now SMA thrombosis, interrupting it briefly to remove the CSF drain. A CTA was obtained to confirm absence of bleeding showing obliteration of the dissection in the aorta and good patency through the true lumen of the SMA.

Most importantly, he had complete relief of his abdominal pain.

The treatment of acute mesenteric ischemia has greatly evolved since I presented my paper in 2002. While open revascularization remains a gold standard, it is becoming increasingly apparent that good to better results may be obtained with an endovascular approach. Dan Clair, our chair, has made the comment that early revascularization with endovascular technique is analogous to emergent PTCA in occlusions of the coronary system and that re-establishing flow is a critical first step.

Open exploration still is the mainstay of managing acute mesenteric ischemia, but laparoscopic exploration remains feasible. This patient underwent open conversion after an initial laparoscopic exploration to remove a ruptured retrocecal appendix that had been treated for over a month on antibiotics. Without bowel necrosis, a second look is usually unnecessary, but is critical when threatened bowel is left behind.