In 2007, at which I had performed about 20 standard EndoRE (Remote Endarterectomy, LeMaitre Vascular) cases over about two years, this patient in his later 40’s presented to me with ischemic rest pain of his right foot. He was a current heavy smoker who initially had severe claudication and a TASC D occlusion of his right superficial femoral artery. Prior to being referred to me, he had undergone a mitral valve replacement from which he recovered uneventfully. He then had treatment of claudication starting with iliac stenting and a vein bypass. He had undergone a femoral artery to below knee popliteal artery bypass with reversed greater saphenous vein which became occluded after being complicated by MRSA wound infections. When this graft developed problems at the distal anastomosis, he underwent revision with a jump graft from the arm. This graft went down after he developed MRSA infection of the cephalic vein harvest site. He then underwent SFA stenting with 5 femoral stents (at that time, long stents were not available), but these occluded and his access site was the nidus of MRSA based sepsis. He had had multiple hospitalizations for MRSA infection from phlebotomy sites when he presented. He had reintervention for in-stent restenosis, first with balloons, then an extra stent, then cryoballoon therapy, each episode complicated by MRSA infection. He presented with severe claudication and nocturnal rest pain. On exam, he had dependent rubor, elevation pallor and absence of pulses, despite having fairly benign anatomy on CTA.

There was two vessel runoff below a reconstituted popliteal artery, with stent occlusion and visible stump of the vein bypass.

My options included bypass with PTFE, cadaveric vein, endovascular recanalization of the occluded stents, or EndoRE. While considering the MRSA which had been extensively worked up prior to presentation by ID including TEE and multiple cultures, it was decided that he was firmly colonized with MRSA despite efforts at eradication, and PTFE was not an option. Cadaveric vein I have used in infections with acceptable short term results -never great long term except for one individual who I inherited from a surgeon in Kansas who maintained a decade of patency of a cadaveric vein to tibial artery bypass with coumadin alone. This patient was not likely to be so lucky. Endovascular recanalization with atherectomy versus laser was considered, but I had at that point become disillusioned with those modalities in such extensive disease.

EndoRE made the most sense because it was my observation in a prior patient in whom I had unintentionally removed a 4cm stent with plaque that stents are placed inside plaques and when you remove plaque, theoretically, the stents have a layer of plaque between them at the adventitia. Also, he had none of the extensive calcium that made regular EndoRE challenging. Also, it would be repaired with native tissues through a single groin incision, and covered with a sartorius flap. And that is what I did.

The common femoral artery was exposed and the SFA controlled. The plaque dissection was started and the ring fitted around plaque and stent. There was a little more friction than expected, but I did inject via a catheter cold LR with the idea that it would shrink the nitinol a bit. Also, the wire that guided the catheter did double duty as a dissector as I was subintimal with it. The rings traveled well to the end point which I achieved with little difficulty. 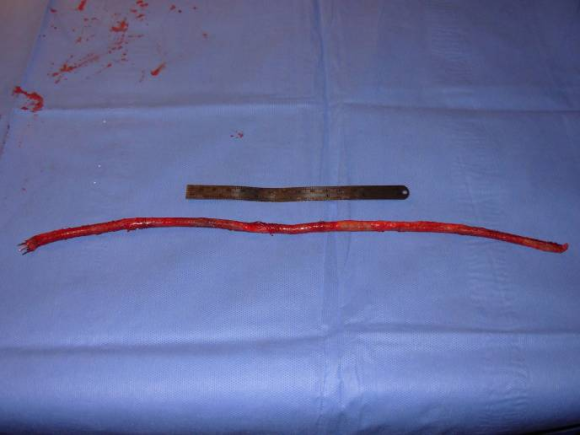 The end point was dissected and required a short self expanding stent. The patient recovered well and was discharged, but as in prior admissions, developed a cellulitis on the groin wound that resolved with Vancomycin, presumably with MRSA. A CTA done at that admission showed excellent patency and he had palpable pulses. 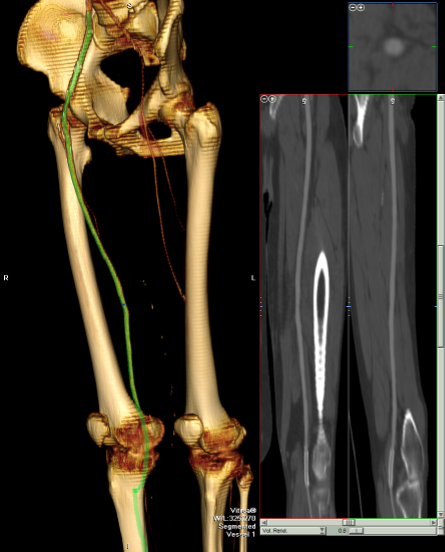 Three years later, he underwent intervention by one of my partners in cardiology at that time for a restenosis in the mid SFA and had ballooning and a stent -the second set of stents in this patient, and by the time I left Iowa, he was still patent and walking.

This operation fails with randomly distributed TASC A lesions that develop in sites of remnant smooth muscle. I think today, I would treat with a drug eluting balloon. Thrombosis is the other failure mode, but unlike PTFE grafts, there is no thromboembolism of the outflow, rather, the SFA thromboses with reconstitution of the original state, and is amenable to thrombolysis. Smokers such as this patient and those with limited outflow are anticoagulated with warfarin.

The Europeans call this now arterial restoration. The vessel is returned to its baseline state with a full complement of collaterals which are revived. Also, compliance is restored and I believe this plays a significant role in maintenance of patency. Also, as the native tissues heal, they return to a normal ultrastructure -I have taken pathology specimen with aortic punches to perform bypasses to the other leg from external iliacs treated so, and they were microscopically and visibly normal.