Recently, I saw a case presentation uploaded to LinkedIn of a subclavian venous stenosis treated with balloon venoplasty and a stent for venous congestion of the arm. The images were beautifully clear. The stenosis was at the thoracic outlet. The comments were generally favorable, including congratulations for a nice case, but I had to put in my two cents: The thoracic outlet is a terrible place for a stent due to external compression, and once occluded, a stent in the venous position is a permanent obstruction. The justification was that the patient did not want surgery and there were no surgeons who did first rib resections where the post author worked. I refrained from commenting something about primum non nocere.

This patient from the images above is a middle aged man who competes in triathalons and who noted sudden onset of discomfort and heaviness and pain in his left arm. Ultrasound revealed DVT in his axillosubclavian veins extending into his brachial veins and he was started on anticoagulation. He had been on anticoagulation for about a month by the time he came to my clinic. On examination, he had a prominent superficial veins on his shoulder, but otherwise had a normal examination. He did not have arterial obstruction on TOS (thoracic outlet syndrome) maneuvers and had no neurologic symptoms. I recommended first rib resection.

The patient’s first reaction was a dubious expression. After all, in this day and age, isn’t it barbaric to offer to cut out a rib? Why not put a stent there? A CT venogram was obtained showing the subclavian vein occlusion, but we knew that. I use the 3D surface reconstructions extensively as a visual map to determine surgical approach. I remove first ribs through both supraclavicular and transaxillary approaches, choosing one or the other. 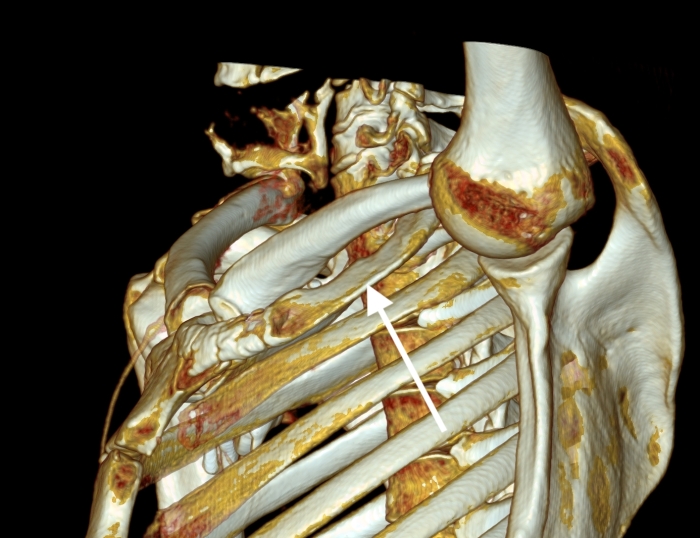 The 3D reconstruction of the bones showed that to get to the first rib section underlying the vein, it was best approached via a transaxillary approach. The arrow in the image shows the flare in the first rib where the anterior scalene muscle attaches. Adding muscle shows that in this well muscled patient, getting to the first rib would be a challenge -for the people holding the retractors. 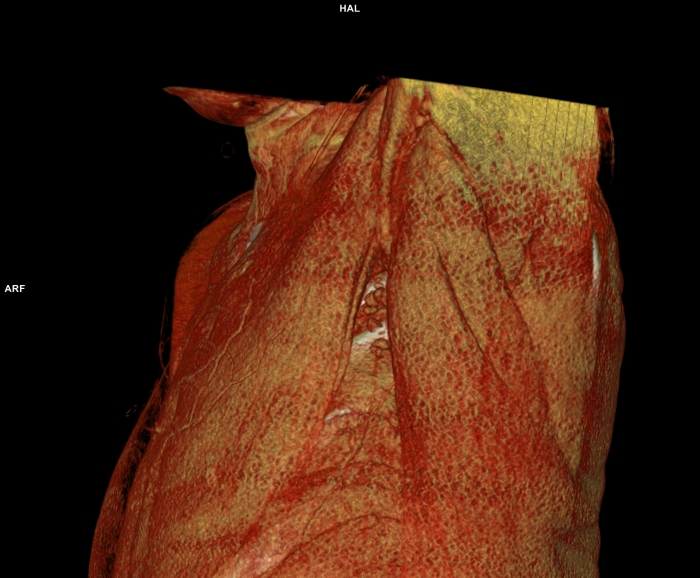 The operation is done with the patient in right lateral decubitus position and requires deep retraction and good lighting -I have played with using the laparoscope (more to come). Laparoscopic instruments such as the Maryland tipped ligasure and hook cautery get much use in this operation. The special sauce to getting this done quickly here in Abu Dhabi where I don’t have the army of residents and fellows is getting my colleagues in Orthopedic spine (Dr. Nader Hebela) and Thoracic Surgery (Dr. Redha Souilamas) interested in TOS.

Where I would laboriously chew through the ribs with a Kerrison, Dr. Hebela has shown me the high art of the hammer and chisel (notice the clean lines on the cut rib below). Dr. Souilamas has seeded the idea of doing this entirely thoracoscopically from the thoracic cavity, and yes, it is right there to see when I recently visited one of his operations -where is that cadaver lab when you need one? Enough rib was resected to ensure the vein, artery, and plexus were completely free.

The patient did well, recovering much of his range of motion quickly with the help of physical therapy. He was taken to the angio suite and underwent venography shown below. There is an occlusion of the subclavian with outflow via collateral veins. Not seeing collaterals is as important as seeing a good angiographic result. 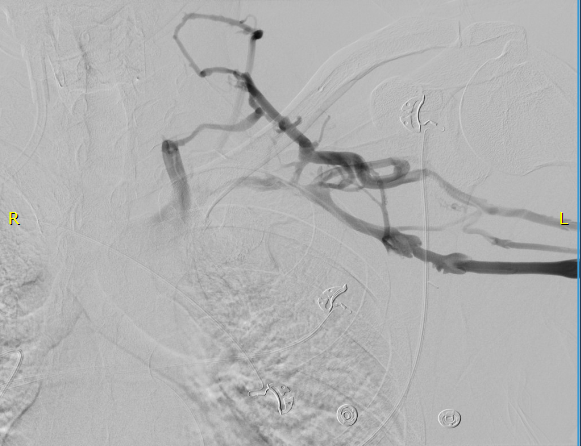 Venoplasty was done to 8mm -I try not be overly aggressive here, just to break the strictures that caused the balloon to have a waist in two sections. The final result is below, with the absence of the venous collaterals. If they were still present despite an angiographically satisfactory result, I would perform IVUS to see what the problem was. In no circumstances would I place a stent at this juncture -my plan is to keep the patient on anticoagulation for 3 more months. 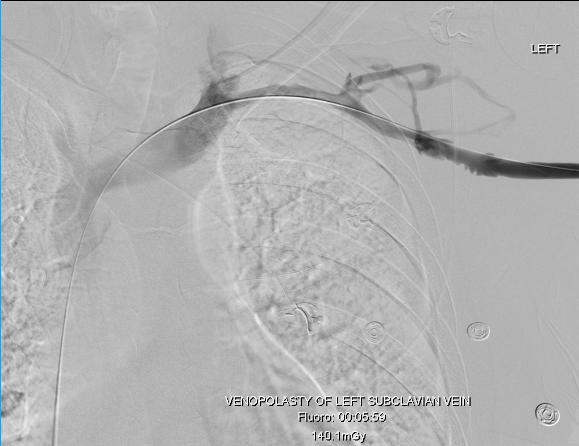 First rib resection should be in the armamentarium of every vascular surgeon. I sense a rise in the diagnosis of this and this has been commented on the SVSConnect boards (link), possibly from a greater awareness of the signs and symptoms of the diseases associated with the thoracic outlet. Since coming to CCAD, there have been enough cases for it to become a routine which I did not expect. 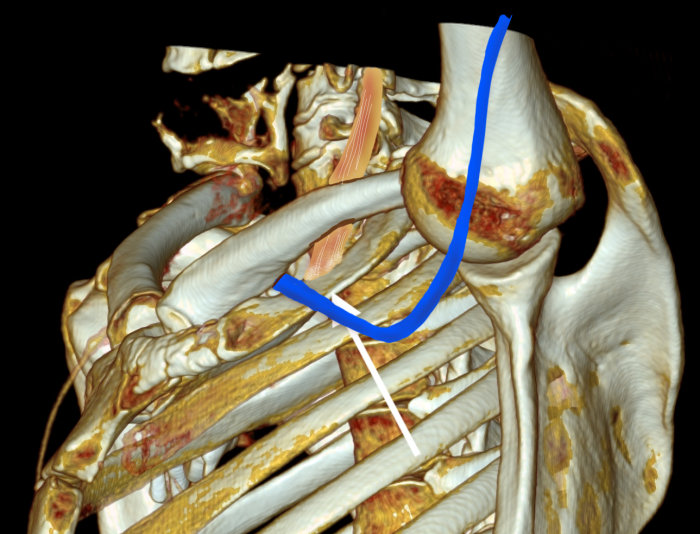 The thoracic outlet, like the median arcuate ligament and the inguinal ligament, cause trouble for stents.

Looking at the thoracic outlet (above), the vein has a particularly narrow outlet under the hinge of clavicle and rib. I generally find it tragic to see a stent here because it limits the possibility of improvement with rib resection. Like the median arcuate ligament for the celiac axis and the inguinal ligament for the common femoral artery, stents get crushed in this position. If you think about it, it is probably our insistence on bipedalism that engendered these design flaws. Stents get compressed by the weight of the shoulder and arm (thoracic outlet), the mediastinum (median arcuate ligament), and the abdominal cavity organs (inguinal ligament) under these choke points, something the quadruped does not suffer.

So is it barbaric, this open surgery? No. The barbarism is in offering patients an easy solution that will get that patient out the door happy, but not knowing (at best) or not caring (at worst) that the biomechanics do not favor any kind of durability.