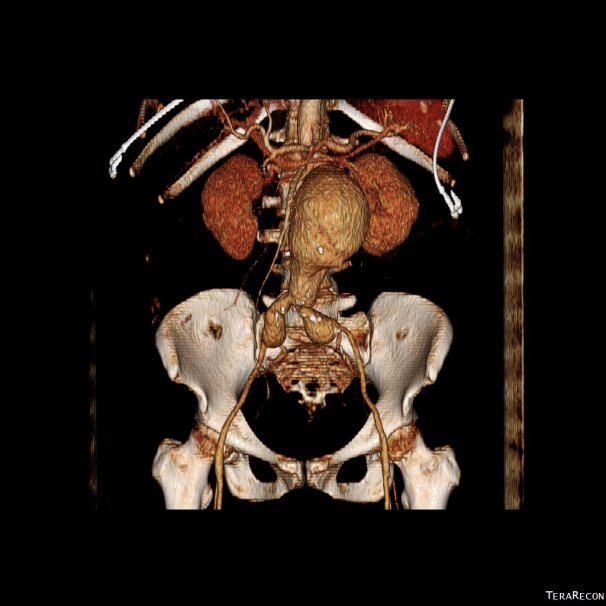 The patient, a younger middle aged woman, was referred for treatment of a large, growing infrarenal AAA over 8cm in size complicating a severe pancreatitis. The pancreatitis occurred about a month prior to presentation and resulted in a substantial pancreatic leak. At the time of that presentation, her AAA was found incidentally and was about 7cm. In the interval, her pain resolved and she was asymptomatic. On examination, her abdomen was soft, and a large aortic aneurysm was easily palpable. 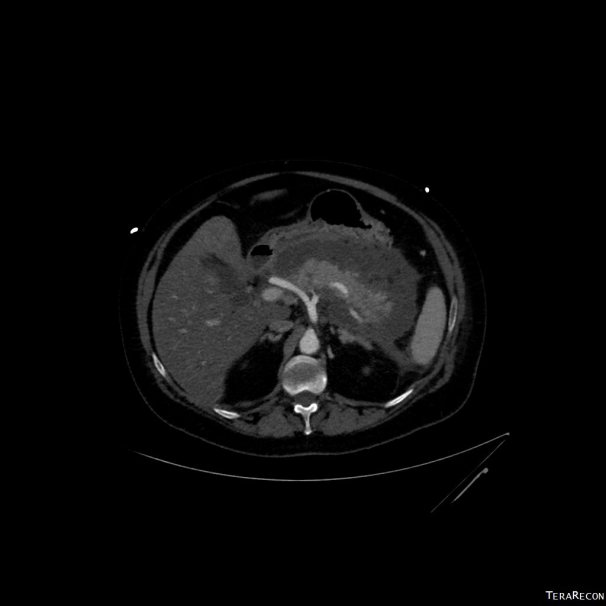 CT scan was performed showing an enlarging AAA over 8am and abundant retroperitoneal pancreatic fluid without abscess or infection. The AAA was infrarenal but complicated by a severely tortuous, short infrarenal neck with 90 degrees of angulation and about 8mm in length. As the pancreatic leak was yet early in the process, no pseudo aneurysms had formed. MRCP showed no active leak. 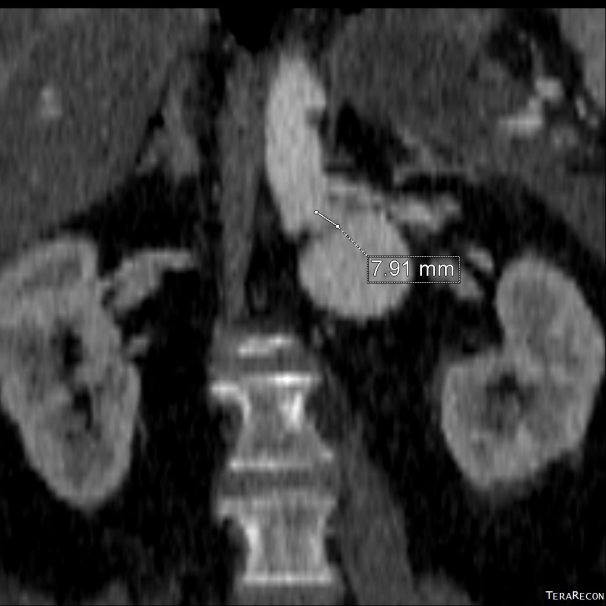 Other than the pancreatitis, the patient, who was in her 50’s, was an otherwise good risk patient.

The treatment options were:
1. Wait until pancreatic fluid resolution or pseudo aneurysm formation, then standard open repair of the large aortoiliac arterial aneurysm. Not desirable because of the relatively rapid aneurysm growth and current size.
2. EVAR -This is outside the IFU for any of the available devices because of the highly tortuous neck anatomy. While note shown, the external iliac arteries were 5mm in diameter, but in the absence of plaque, was possibly due to spasm. The Nellix device is yet on trial, but there are limits on how much you can straighten this neck. The devices with suprarenal stents end up straightening out the graft with deployment of the graft in an ellipse. This also means loss of seal zone length which decreases with oblique deployment. FEVAR is not possible because of this neck tortuosity as well but was considered briefly.
3. Homograft repair or Rifampin soaked graft repair -The former is costly and still susceptible to infection from a virulent organism as is the latter, but both are likely safe with likely foregut flora.
4. Neo-Aorta reconstruction (NAS) with deep femoral vein. This could work, but is time consuming and relatively morbid. The tactic of mobilizing the vein and then repairing the aneurysm in a separate, staged fashion the following day or two is reported to shorten the overall operative time. This patient would require both femoral veins to be harvested.
5. Aneurysm exclusion and extra-anatomic bypass with axillofemoral bypass. Offered to complete this list, this is the least desirable option given the poor long term behavior of axillofemoral bypasses in younger patients.

When faced with this kind of challenge, it makes sense and should be standard practice to get the opinion of the group. I happen to have excellent partners to run this kind of cases. The consensus was this: EVAR with accepting a short term result to temporize until definitive repair could be done. I found this acceptable. I chose to use the Excluder device because it allows for redos of the proximal deployment (C3 Delivery system) and the 23mm and 26mm devices used 16F access. A detailed discussion with the patient and the intention to eventually definitively repair open was discussed and patient was agreeable to proceeding. Plan B’s of Rifampin soaked graft replacement and NAS was also discussed.

I tried two things that was different. I felt that a stiff wire would result in horizontal orientation of the top of the graft, and so I placed a bend in the wire. Prior experience with unintended bends in wires have taught me that passing these wires is largely tolerated as long as it is done through catheters and sheaths. The other thing I did was bend the top of the delivery system -this was done with some care as I did not want to detach the contraining mechanism. 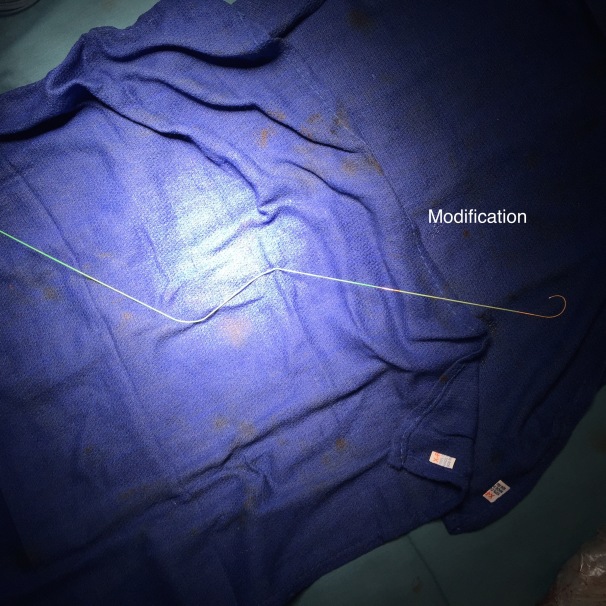 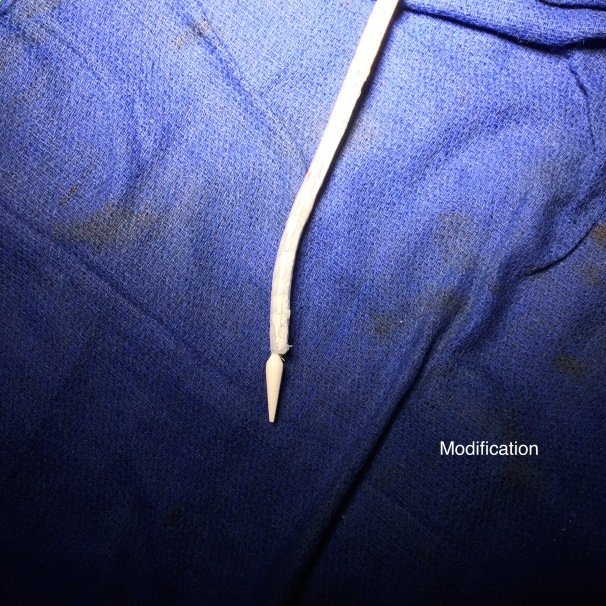 The wire and delivery system modification did tilt the top of the graft away from the left side of the aorta. It had the unintended effect of keeping the wall grabbing anchors away from the near wall while constrained. 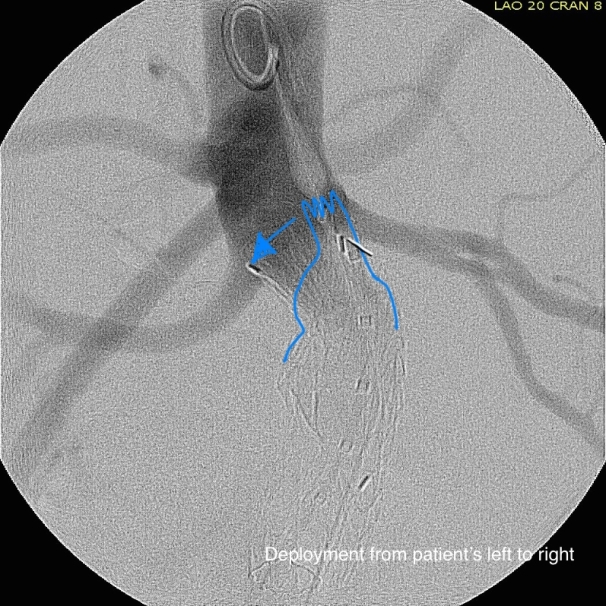 It didn’t tilt the graft as much as I would have liked, but the graft deployed in a left to right fashion that allowed for controlled delivery across all of the available neck. Gratifyingly there was seal (below). I flared the right, while excluding the left iliac bifurcation because of the larger iliac aneurysm.

As this was done percutaneously, the patient recovered rapidly and was discharged a day later. The question philosophically for me is if the seal remains intact, would there ever be a need for explantation? The patient only received perioperative antibiotics, and I felt long term antibiotics was not indicated. Standard followup was arranged.

There is no question there is a need for devices designed for this kind of neck anatomy. These devices need to bend over to angles at least 90 degrees and unbend based on delivery system design. They need to be low profile as this facilitated repair in this patient with small access vessels.