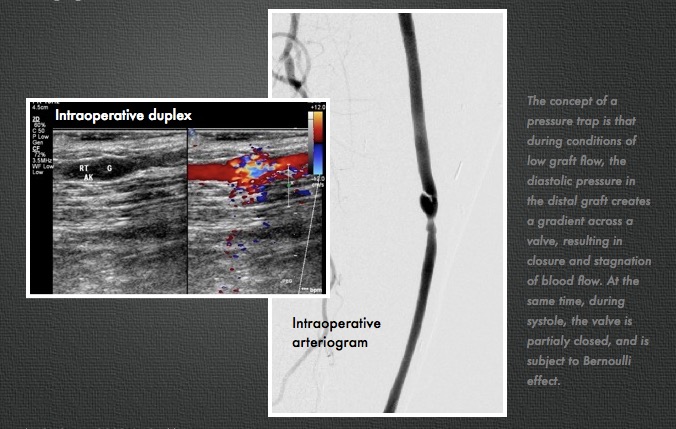 The patient was originally bypassed for ischemic rest pain due to femoropoliteal occlusive disease. He had an occlusion of his popliteal artery with reconstitution of his below knee popliteal artery. I performed a femoro-posterior tibial artery bypass with reversed saphenous vein.

In followup, he developed at worsening stenosis in the distal graft at around 10 months post-op. Arteriography showed a moderate stenosis due to a valve that appeared to close. It was reported retained valve cusps which was strange because the vein was reversed. The flow was noted to be sluggish in the distal runoff, without a distal anastomotic stenosis. He was taken to the operating room, and this valve station was exposed and it had a severe stenosis due to valvular hypertrophy. This was repaired with patch angioplasty. At that time, I thought that this had developed due to a dynamic stenosis. No other stenoses were seen at that time.

In followup, after an initial period of two months without symptoms, the patient developed claudication that worsened. Graft duplex showed a severe stenosis in the mid graft. This was a valve station that was proximal to the previously treated valve station. 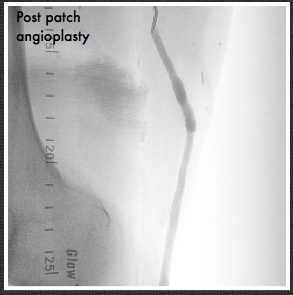 I took him to the operative endovascular suite, and arteriography showed a severe stenosis (image above, right) due to a hypertrophied valve. .

On review of the literature, I find that Tullis, Strandness et al. found 11 of 66 (17%) reversed saphenous vein bypass grafts had functional valves, with 50% of these developing  >50% stenosis, with a mean time to recognition being 10 months [ref 1]. In a followup study, Strandness’s group found that valve related revisions composed 16.7% of all graft revisions in reversed vein bypass grafts, while none of the revisions for in-situ grafts were valve related. No specific valve features, they concluded, could be identified as a high risk [ref 2].

Robiscek et al [ref 3] performed intraoperative flow studies and found that under conditions of low graft flow, pressure traps occurred in reversed vein grafts. When diastolic pressure in the vein segment distal to the valve is greater than the systemic diastolic pressure, the valve closes.

This patient does have sluggish outflow due to tibial arteries that are severely disease. I believe this causes a pressure trap, but I don’t believe it is a sufficient condition for development of valvular hypertropy resulting in a stenosis.

I think that a second factor is fluttering of the valves due to turbulence. The valve cusps are in a widened segment of vein, and there is naturally turbulence that occurs -this may cause the valve leaflet to flutter like a flag in a stiff wind and cause intimal hyperplasia. 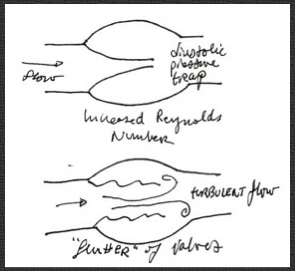 The concept of a pressure trap is that during conditions of low graft flow, the diastolic pressure in the distal graft creates a gradient across a valve, resulting in closure and stagnation of blood flow. At the same time, at the onset of systole, the valve is partialy closed, and is subject to Bernoulli effect.

This is supported by the pathology which shows hypertrophy of the resected valve cusps.

This model would predict another stenosis at a more proximal point at some later date if the patient has another valve station.

While I still reverse the vein when I bypass, I am cognizant of vessel sizes and won’t reverse if there is too great of a taper in the vein diameter. I also think that not reversing to diseased or single vessel tibial runoff may be a way of avoiding this problem.