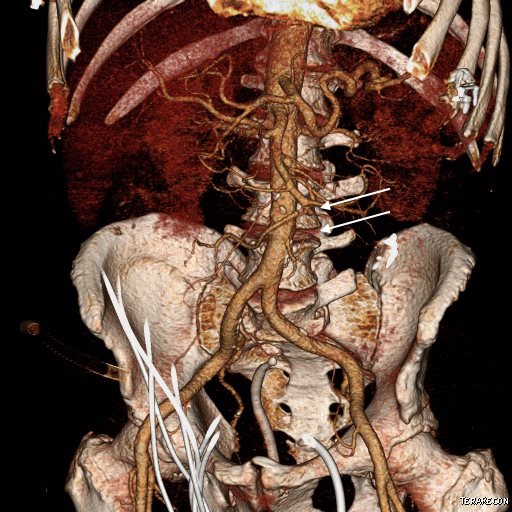 Sometimes the best conduit is no conduit.

The patient presented with abdominal pain and fevers which was initially diagnosed as a urinary tract infection. He is an older man with a prosthetic aortic valve and prostatic cancer who had a Foley catheter for several weeks leading up to a prostatectomy. Antibiotics relieved his abdominal pain. Echocardiogram revealed aortic valve vegetations. A CT scan revealed a mycotic mesenteric aneurysm and vascular surgery was consulted. 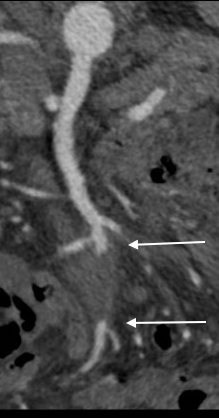 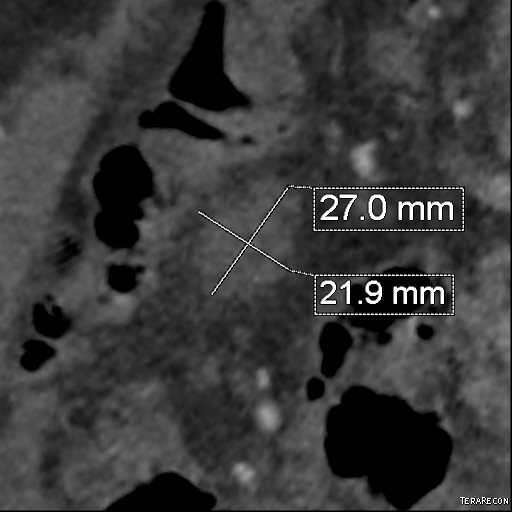 Examination revealed moderate cachexia and a soft abdomen. He was taken to the operating room for resection of aneurysm. Laparotomy revealed a mass in the small bowel mesentery root. The aneurysm had moderate but not excessive amounts of inflammation. 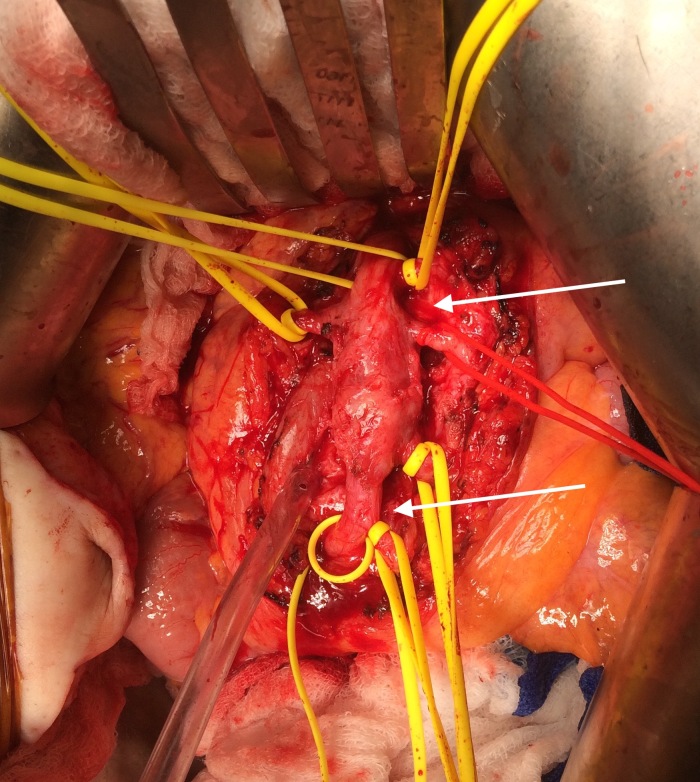 The CTA had shown the superior mesenteric artery to be patent above and below what was likely an embolized vegetation (see white arrows in all images).

The treatment goal was aneurysm resection with an intraoperative determination of need for revascularization. His thighs were prepped for possible saphenous vein harvest and cryopreserved artery was available.

Resection revealed the artery to be infected. There was good backbleeding from the distal SMA. 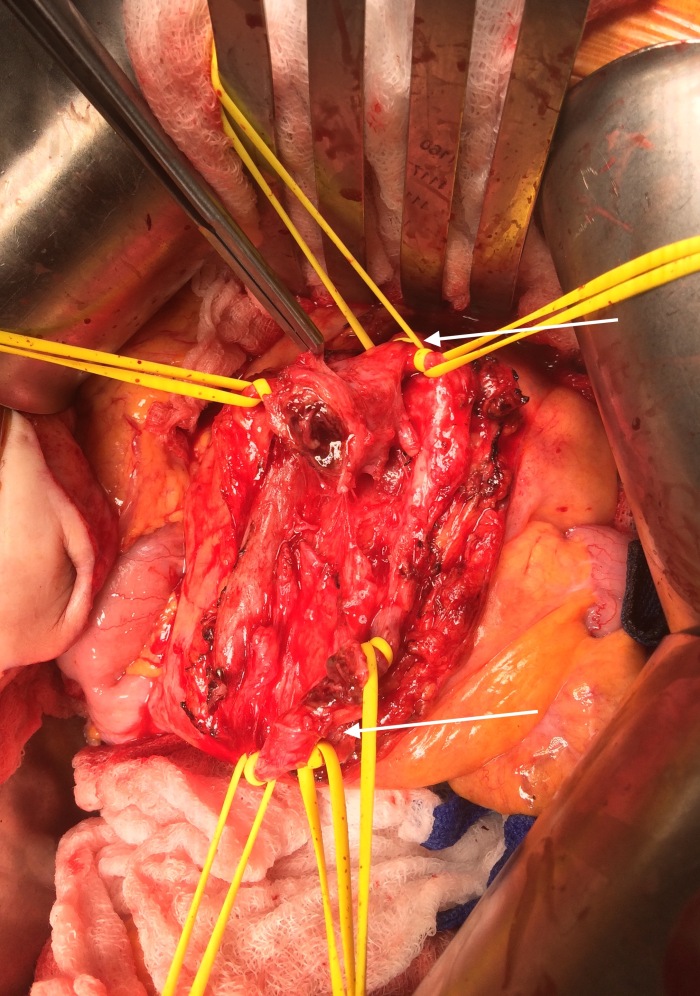 The handheld Doppler signals in the distal segment of SMA were excellent, corresponding to the viable bowel, but the patient’s cachexia and relative inanition concerned me for future bowel ischemia complicating his planned redo aortic valve replacement and subsequent prostatectomy.

But before I embarked on vein harvest, a simple maneuver determined my next step. I brought the distal SMA to the proximal SMA and found there was enough laxity to simply anastomose both to each other. 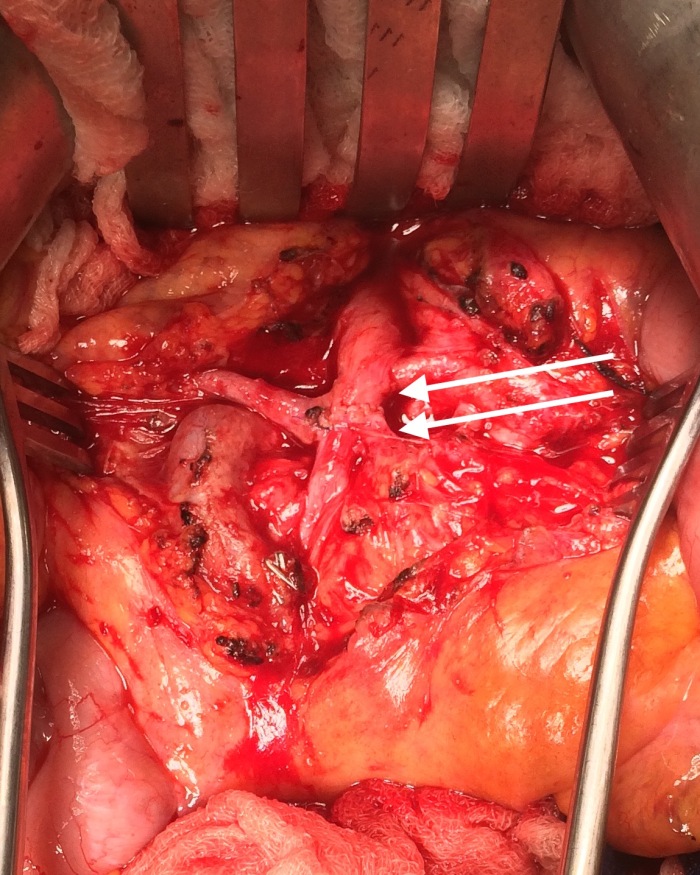 The flows were now excellent in the SMA. The patient recovered uneventfully, requiring no subsequent bowel resection. He then had his redo-aortic valve replacement from which he recovered well from and ultimately soon after had his prostatectomy.

Treatment with antibiotics without resection is not a good option as the majority of these rare aneurysm go on to rupture if left unresected. A frequently cited article by Drs. DeBakey and Cooley from 1953 (ref 1) and other subsequent articles show success with simple resection. While cryografts and saphenous vein grafts are subject to infection, they can be used safely in this setting, but the best conduit using no conduit. Often, aneurysms start at a small nidus and not only expand but elongate, given an opportunity to repair aneurysms primarily.

2 thoughts on “Visceral Mycotic Aneurysm Treated with Resection and Revascularization”