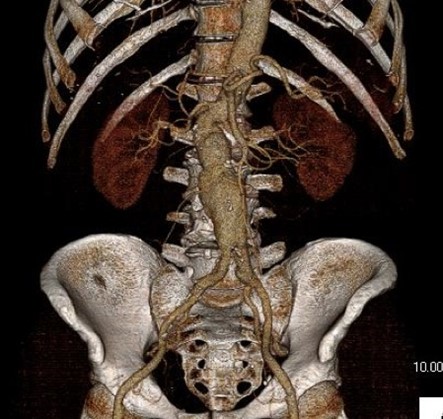 One of the many conversations I had with Dr. PJ O’Hara, who just recently retired, was about the place of traditional open vascular surgery. It is well known that many vascular surgeons are graduating with only a handful of open aortas. The idea of creating an open vascular (exovascular) fellowship was actually floated among the society leadership, but I suspect it was mainly the kind of idea that occurs when seasoned surgeons get together for a beer. This CTA above shows the kind of aneurysm that still benefits from open repair. It is a juxtarenal AAA with a highly angulated, short neck. This was one of the cases I did in my last practice. The patient did very well and went home on POD #5. A CT was done at a later date for possible dissection (there was none) but I got to check out my work (below). 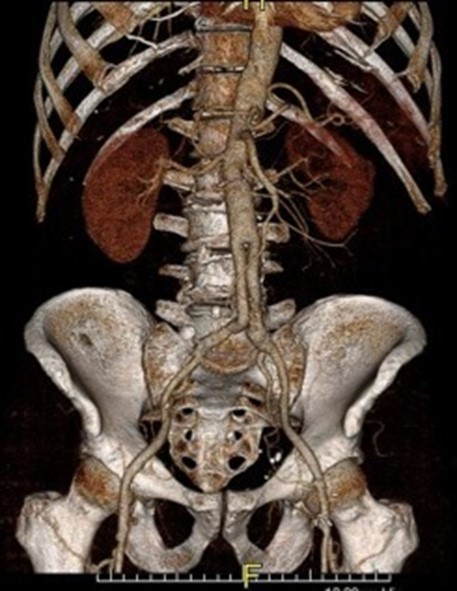 Unlike my patients who undergo EVAR, this patient won’t need intensive lifelong followup. While there is a small rate of complication in the mid and long term with open repair, these are infrequent and frankly rare. This is in contrast to the demands, often spelled out in the IFU’s, of stent grafts that require imaging and followup at 1 month, 6 month, 12 months, and annually for life. This is usually a CT scan and ultrasound, plus time and travel. While this is usually an agreeable tradeoff to most patients who are easily frightened by open aortic surgery, the cost to our healthcare system is not trivial.

The DREAM trial showed that the benefit of EVAR versus open repair is lost after a year. Most of the benefit is in the short term –in hospital stay, complication rates, and recovery time. EVAR also allows more surgeons and even nonsurgeons to treat aneurysms. Clearly, for the higher risk patients, the extra year or two of complication free life is worthwhile and avoiding possible death from open aortic surgery may be a good thing, but for the majority of patients, we still have to ask far more and far better from the technology. This starts with getting reintervention rates closer to zero and significantly diminished followup protocol printed on the IFU. It also means allowing it to cost the same as open surgery. It probably means changing the way we assess and approve medical devices.

My personal journey through the past twenty years since I started my career (I was an intern in 1994!) has been a witness to vast changes in how we treat vascular diseases. Vascular surgery was more art than science, and many fellowships were indentured servitude to a famous surgeon, usually with a fearsome reputation. There was selection pressure in the process for certain personality types – fanatically committed to received wisdom and suspicious of change. Frankly, I was not a good fit, being relatively open minded, suspicious of dogmatism, and always looking for a better way.

There was an industry sales representative back those Manhattan days. David Hunt took an interest in the peons and always brought in the best food and swag –I know this is verboten these days, but I’m talking about history here. He brought in needle holders and sutures, and trays for holding grafts for practicing anastomoses, which I did practice on those interminable weekend calls up in our Stuyvesant 10 call rooms. When you ran out of grafts, a call to Dave, and he’d bring in several bags of graft (PTFE). Clearly, the crack dealers and lobbyists didn’t have a monopoly on this sort of sales technique.

One day, he brought in stent grafts –something out of the labs, and mockups of AAA’s. My mind reeled playing with EVAR. This was the future. That fall, I pulled some favors and left work early, and got to the Hilton wearing a blazer over my scrubs. Sneaking into the Veith Symposium, I was shopping my own future. I walked around the halls laden with all kinds of stent grafts and mock ups of space age operating rooms with fluoroscopy built into them. Dodging the security, I snuck into lectures and listened to the early data, and the resounding condemnation of the angry old men. I had to be part of this. This was supercool. This was the future.

I wasn’t alone in this endo-enthusiasm. A whole generation of vascular surgeons fell into its spell. There was the urgency of training to avoid the perceived obsolescence of not being able to perform endovascular procedures. Back then, it was very difficult to get training and subsequently privileging to do endovascular. I had the great fortune of working with Dan Clair while we were at Columbia in the early 00’s.

Even back then, I also perceived a rush to cast off open surgery, even in myself. There was a thrill at crossing a long SFA occlusion with a wire. It felt like victory sparing someone a long vein bypass operation. Every year, new gadgets came along to make the crossing and opening of closed arteries slicker and easier. But the truth echoed in the condemnations of the angry old men, many who were at this point retiring en mass, was that most of these procedures weren’t very durable. Where a vein bypass would be good for years, these interventions were sometimes only good for a few months. Many practitioners, usually not vascular surgeons, vocalized that two or three of these procedures was better for the patient than any single huge operation, and (sotto voce) was better for the revenue stream. Procedural failures definitely put water on the fire, especially after the news that many of the investigators for these new devices were also investors.

Endo-enthusiasm grew into eventually a more mature perspective. Which brings me to the point of this meandering entry. I see the best results when the range of potential therapies are tailored for the needs of the patient. A frank discussion about the short, mid, and long term outcomes of any approach allows for a deliberative planning discussion that many patients, especially those who come with literature and research in hand, appreciate. This can only be possible with a practitioner who has mastered both endo and exo– vascular techniques.

I tell people who are applying for vascular surgery training that one of the best metrics for judging a program is the volume of hybrid procedures being performed. It speaks to an ease with all possible techniques and a philosophy based on imagining the best possible path for treating a patient. While there is nothing wrong with seeing programs and practices with an “open guy” or “gal” and the “wire guy” or “gal,” there will be an abundance of both endo and exo-enthusiasm, that is bias.

I believe that this secures the future of vascular surgery. Other specialties can generate unlimited number of endovascular specialists, but only vascular surgery can produce the individual who can perform a redo common femoral endarterectomy, profundaplasty, endovascular aortoiliac recanalization, and infrageniculate vein bypass to save a leg and a life. Only vascular surgery can produce the individual who can judge that with any credibility that limb salvage attempts are likely to fail and recommend primary leg amputation and rehab and have the patient walking on a modern prosthetic limb within a month, and maybe even running within a year. And that same surgeon can perform a tibial intervention to heal an ulcer, and understand that it only needs to stay open 6-12 months and forebear reintervention when the artery is closed and the patient healed and asymptomatic.

So I head to the VEITH symposium looking forward to seeing what’s next. I have a badge this time.