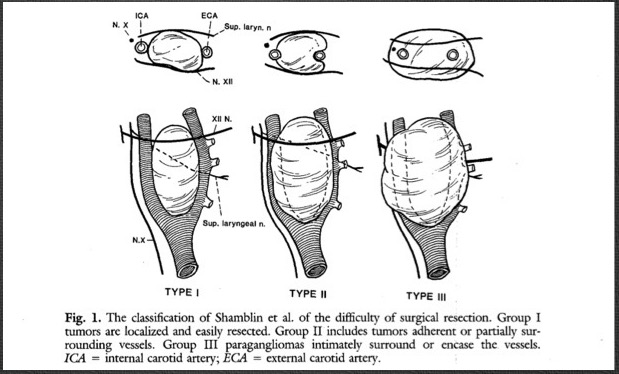 When I was practicing Iowa, I was treating 1 or 2, sometimes three patients with carotid body tumors annually.  During my fellowship, we did about every month, and this was considered typical at the Mayo Clinic. It was there that a resident named Shamblin came up with his eponymous classification of this tumor [ref. 1, figure top from ref. 2, Hallett et al.]:

This was in contrast to what I was taught as a resident in New York City, that carotid body tumors were once a decade or career occurrence. Most of the cases found in my practice at that time were diagnosed by ultrasound, often on carotid screening. No one knows why they cluster in the prairie.

The case in the top movie had bilateral tumors; this occurs in 5%. The bottom movie shows a highly vascularized lesion with a branch coming from the external carotid.

This was embolized on the morning of surgery [figure below], and the tumor was avascular and shrivelled up at extraction. 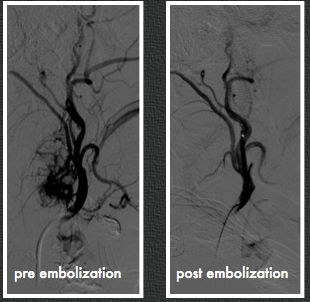 Generally they are not malignant but are characterized by steady growth, mass effect, and eventual unresectability. Some are malignant and will metastasize, generally to lymph nodes. It is believed that malignant carotid body tumors are in the minority.

The use of embolization in larger tumors is a topic that has its proponents and detractors. I have found it useful in larger tumors, but unnecessary in the smaller ones. There is some risk to the patient and these can be technically challenging cases for the neuroradiologists, as these tumors take multiple sources from both internal and external carotid arteries.